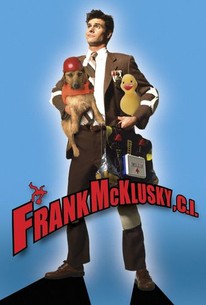 David Sheridan, comic actor and star of MTV's Buzzkill, co-created this goofy comedy with debut screenwriter Mark Perez as the first in a two-picture deal with Disney. Frank McKlusky (Sheridan) is an insurance claims investigator who has been zealously safety conscious since witnessing a horrible motorcycle stunt gone awry in his childhood, an accident that left his father (Randy Quaid) comatose. Frank still lives at home under the watchful eye of his mother (Dolly Parton) and wears a helmet everywhere he goes. When his partner is killed, Frank is forced to leave his safe and secure life behind, go undercover, and crack the case, which he discovers is a sinister conspiracy. Unfortunately for the villains, Frank turns out to be a first-class bumbler in the Inspector Clouseau mold. Frank McKlusky, C.I. co-stars Kevin Pollak, Andy Richter, and Enrico Colantoni.

Patrick Cranshaw
as The Old Man

Scott Baio
as Himself

Lou Ferrigno
as Himself

Isaac Hanson
as Himself

Zac Hanson
as Himself

Jordan Taylor Hanson
as Himself

Gary Owens
as Himself

Willie Tyler
as Himself
View All

Every now and again, a movie comes along to remind us of how very bad a motion picture can truly be. Frank McKlusky C.I. is that movie!

If you're actively searching for the year's most offensive comedy, look no further...

Plays like the offensive, unfunny spawn of Ace Ventura and Hot Rod.