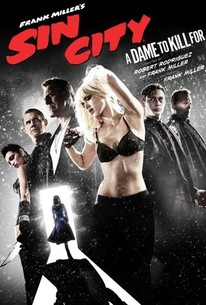 Critics Consensus: A Dame to Kill For boasts the same stylish violence and striking visual palette as the original Sin City, but lacks its predecessor's brutal impact.

Critics Consensus: A Dame to Kill For boasts the same stylish violence and striking visual palette as the original Sin City, but lacks its predecessor's brutal impact.

Critic Consensus: A Dame to Kill For boasts the same stylish violence and striking visual palette as the original Sin City, but lacks its predecessor's brutal impact.

Frank Miller's Sin City: A Dame to Kill For Photos

Will Beinbrink
as Lawyer

Christian Bowman
as The Man

Johnny Reno
as Weevil
View All

Critic Reviews for Frank Miller's Sin City: A Dame to Kill For

To call Sin City noir is to misunderstand the genre, as perhaps Miller does. Each story ends pretty simply-in brutal fighting and murder-and lacks genuine intrigue or ambiguity.

The duration between the first film and its sequel doesn't fully explain the new film's flaws, it's quite instructive when examining the reactions to them.

There's a bleak beauty to all of this, but also there's a reliance on stereotypes, male and female, that, while they come directly from the source material, are starting to become irritating.

The movie is a more joyless affair than all this suggests. Had you never seen a film noir, nor read any Raymond Chandler or Mickey Spillane, you would not guess from watching this picture that the genre was known for whiskey-dry wit.

The latest Sin City is a major let-down after the brilliance of the original film in 2005.

Reviewers were forbidden from posting a word about this sequel until opening day, lest we give away the shocking secret that it's a carbon copy of its predecessor.

Haters Gonna Hate, But I Loved Being Back in Sin City

There's nothing to wow here.

A slickly styled exercise in pointlessness.

Some of the supporting newcomers, I'm thinking of Dennis Haysbert and Jeremy Piven in particular, are welcome additions.

Audience Reviews for Frank Miller's Sin City: A Dame to Kill For

Not really my favorite genre, but visually beautiful and Eva Green, so no grizzling from me.

Oddly lifeless prequel to the 2005 already-classic. While a superficial glance might make you think things are just like in the first film, actually, they're not. The effects look faker, the characters just don't click, or don't feel like the same ones anymore (excluding Rourke's Marv). Sure, there is some gory action, a lot of crime noir voice over and all that jazz, but it all feels so pretentious this time and leaves you so very indifferent, in worst cases even pisses you off. I don't wanna say this almost ruins the original, but now I dunno how to finish this sentence. Miss out on this if you can.

I can't really decide which of the subplots is the dullest and most forgettable, or if Nancy's revenge story could have possibly been any less pointless or dragged any less had it been cut by half - everything so flat that it doesn't even make me want to write about it.

Frank Miller's Sin City: A Dame to Kill For Quotes