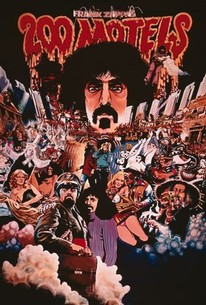 This comic rockumentary-style musical imparts the experiences of Frank Zappa and the Mothers of Invention during a prolonged (and largely imaginary) road tour. This roisterous fable is brought to the screen in a number of colorful and improbable episodes without a strong narrative connection, but is accompanied by music composed specifically for the film by Zappa and the Mothers of Invention. The musicians are inspired to bring poetic justice to Centerville, a Midwestern town which is too bland to continue in existence. Among the dramas enacted is the defection of one drummer, the firing of another, and Zappa's announcement to the band and film crew that he would hire the next person to walk in the door, a man who proves to be Ringo Starr's chauffeur. Folk musician Theodore Bikel plays in a number of different roles, and Ringo Starr appears briefly, disguised as Frank Zappa. The Who drummer Keith Moon also makes an appearance.

The Mothers of Invention
as Themselves

Keith Moon
as The Hot Nun

Frank Zappa
as Himself

George Duke
as Member of Mothers of Invention

Howard Kaylan
as Member of Mothers of Invention

Jim Pons
as Himself

Mark Volman
as Member of Mothers of Invention

200 Motels has no particular focal point, being principally an anthology of poor jokes and spectacular audio-visual effects, a few of which might expand the mind, but all of which, taken together, are like an overdose of Novocain.

The incidents are often outrageously irreverent. The comedy is fast and furious, both sophisticated and sophomoric.

It assaults the mind with everything on hand.

200 Motels may pass for sophistication in some quarters but sophomoric is a better description. It is a mixture of rock music and fantasy with very little story line.

The film is a marvelous whirl of color and visual effects, with some fine animation and Zappa's delicious wit present throughout the entire production.

Ringo Starr IS Larry the Dwarf AS Frank Zappa in this druggy pastiche of skits, solarized footage, crude animations, and an operetta about a penis. Most people will wonder what they were smoking when they came up with this; Zappa fans will wonder where they can get some.