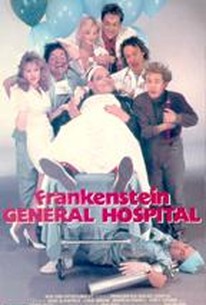 Dr. Bob Frankenstein (Mark Blankfield) is the great-great grandson of his legendary relative Victor in this horror spoof. He uses the basement of General Hospital for his experiments to create what he hopes will be the perfect human. Kathy Shower plays the female psychiatrist Alice Singleton, with Irwin Keyes as the monster. This one is so bad it's good, and Leonard Maltin's searing critical indictment makes it a must-see. It has been called the worst English language Frankenstein film ever made, elevating it to near cult status. Bobby "Boris" Picket appears and reprises his smash Halloween hit The Monster Mash. Nudity and profanity resulted in the feature's R rating.

Ben Stein
as Dr. Who

There are no critic reviews yet for Frankenstein General Hospital. Keep checking Rotten Tomatoes for updates!

There are no featured audience reviews yet. Click the link below to see what others say about Frankenstein General Hospital!