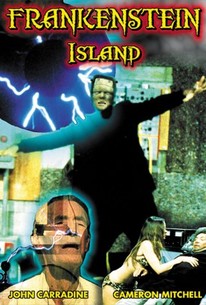 This uproariously bad film marks the less-than-glorious return of producer/director Jerry Warren, shameless purveyor of such cinematic abominations as Teenage Zombies, of which this is a remake of sorts. The crazy-quilt story line defies all rational explanation, but essentially begins with a wayward hot-air balloon crew -- including Warren alumnus Robert Clarke and a dog named Melvin -- becoming stranded on an island overrun by nubile jungle girls in Frederick's of Hollywood leopard-skin thongs. What sounds like an ideal vacation is disrupted by a bunch of zombies in Ray-Bans, the monster-making practices of a bleach-blonde mad scientist named Sheila, and the superimposed face of John Carradine (lifted from another film) mumbling "The Power! The Power! The Power!" Also on hand is a gibbering, drooling Steve Brodie as a howling mad pirate, and Cameron Mitchell as an equally deranged sea captain. It's very likely Warren himself had no idea what his own film was about, so viewers shouldn't waste valuable time trying to make sense of it.

There are no critic reviews yet for Frankenstein Island. Keep checking Rotten Tomatoes for updates!

There are no featured audience reviews yet. Click the link below to see what others say about Frankenstein Island!