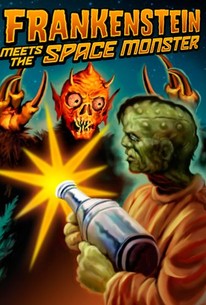 Despite the title, this outrageously bad Rock 'n' Roll monster movie from Puerto Rico features neither the titular monster-maker nor his lumbering creation. Instead, we're presented with an "astro-robot" named Frank, who comes to save the day when Martian forces led by Princess Markuzan (Marilyn Hanold) begin kidnapping scantily-clad Earth females from sock-hops and beach-blanket shindigs everywhere -- apparently with the intent of populating a few parties of their own. The aliens manage to french-fry most of Frank's face off, but he nevertheless manages to snap back (after a few minor adjustments) and give the invaders what-for. Also known by the more honest title Mars Invades Puerto Rico. ~ Cavett Binion, Rovi

It competes on the same playing field with Plan 9 from Outer Space (1959) as one of those lovable worst pics ever made.

Unfortunate that the two met.

The worst movie ever made? Hard to say, given all the competition. Must-see viewing for bad-movie buffs? Oh, yeah.

This is a really low-budget b/w movie but it is very entertaining. This movie has really aged well. Many sci-fi fans that see this movie for the first time will know what I'm talking about. I saw this 1965 movie for the first time in 2006 and loved it. I guess this one fits into the category "so bad it's great." But I consider this a damn good effort, especially considering the budget. The movie is tons of laughs. The alien invaders have an Uncle Fester-looking adviser to a hot-looking queen, who looks kind of like Barbara Steele. They come invading Earth and run into a cyborg ("Frank") built by the good old USA to explore space. This movie even has a helicopter air assault in vintage transport choppers! AWESOME! They had to send the Army to help the cyborg defeat the bat-people aliens and their weapon of last resort - a fanged monster that the aliens themselves can barely control!!!!! This movie has EVERYTHING and any fan of classic sci-fi and 60's bikini party horror should really love it. 3 1/2 stars 12-28-13

Could have been made by Ed Wood.