Frankie and Johnny Are Married (2004) 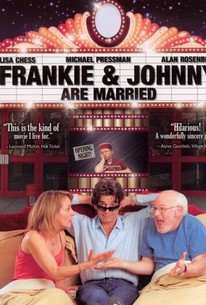 Frankie and Johnny Are Married Photos

Successful television director and film producer Michael Pressman sets off with high hopes when he decides to helm a film production of +Frankie and Johnny in the Clair de Lune. He believes the experience of directing a film starring his struggling actress of a wife (Lisa Chess) will be a fun and relatively easy way to revitalize their marriage. Unfortunately, the decision to cast Alan Rosenberg to play Johnny proves disastrous -- Rosenberg is incredibly difficult to work with and Pressman's already tense relationship becomes steadily worse as the horrific rehearsal and filming process intensifies. The situation looks bleak when, after a devastating preview, Pressman is forced to shut down the play, relinquish his investment, and possibly lose his wife. Of course, the aggrieved director has one option: to take over the role of Johnny. The stakes have never been higher for the married couple, considering their future together appears to hinge on the final outcome of the film. Frankie and Johnny Are Married was directed in real life by the protagonist, Michael Pressman.

Lisa Chess
as Herself

Michael Pressman
as Himself

Alan Rosenberg
as Himself

Lou Antonio
as Himself

Kathy Baker
as Herself

Hector Elizondo
as Himself

Steven Glick
as Himself

David E. Kelley
as Himself

Jerry Levine
as Himself

Leslie Moonves
as Himself

Vahan Moosekian
as Man on Street

James Oliver
as Billy the Assistant

Jeffery Passero
as Himself

Mandy Patinkin
as Himself

Brooks Pressman
as Himself

Barry Primus
as Himself

Nina Tassler
as Herself

Alice West
as Herself
View All

Critic Reviews for Frankie and Johnny Are Married

Most entertaining is Alan Rosenberg's wicked spoof of actorly neuroses.

We get, basically, a love note from one to the other. But what we don't get is an absorbing movie.

A funny, tender, satisfying blend of fiction and cinema vérité.

A chronicle of embarrassment that gratifyingly, if narrowly, avoids embarrassing itself.

There's little that's particularly dramatic or funny for the outsider in this autobiographical vanity project.

The pleasant surprise is that it's often funny and unexpectedly engaging, in large part because Pressman knows better than to ask you to feel too sorry for the fictitious 'Pressman' and 'Chess.'

A delightful little sleeper of a love story.

It's art imitating life imitating art -- or something like that. Whatever, it's not very good.

Audience Reviews for Frankie and Johnny Are Married

There are no featured audience reviews yet. Click the link below to see what others say about Frankie and Johnny Are Married!

Frankie and Johnny Are Married Quotes