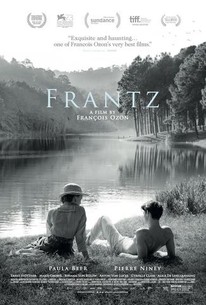 Critics Consensus: Frantz finds writer-director François Ozon thoughtfully probing the aftermath of World War I through the memories and relationships of loved ones left behind.

Critics Consensus: Frantz finds writer-director François Ozon thoughtfully probing the aftermath of World War I through the memories and relationships of loved ones left behind.

Critic Consensus: Frantz finds writer-director François Ozon thoughtfully probing the aftermath of World War I through the memories and relationships of loved ones left behind.

Set in Germany and France in the immediate aftermath of the First World War, (1914-1918), Frantz recalls the mourning period that follows great national tragedies as seen through the eyes of the war's "lost generation": Anna (21 year-old Paula Beer in a breakthrough performance), a bereft young German woman whose fiancé, Frantz, was killed during trench warfare, and Adrien (Pierre Niney, Yves Saint Laurent), a French veteran of the war who shows up mysteriously in her town, placing flowers on Frantz's grave. Adrien's presence is met with resistance by the small community still reeling from Germany's defeat, yet Anna gradually gets closer to the handsome and melancholy young man, as she learns of his deep friendship with Frantz, conjured up in evocative flashbacks. What follows is a surprising exploration of how Ozon's characters' wrestle with their conflicting feelings - survivor's guilt, anger at one's losses, the overriding desire for happiness despite everything that has come before, and the longing for sexual, romantic and familial attachments. Ozon drew his inspiration from Ernst Lubitsch's 1932 drama Broken Lullaby, with stunning visual references to painter Caspar David Friedrich.

Watch Online: The Walking Dead, Bojack Horseman, Dirty Dancing, and More on Netflix and Amazon Prime
On DVD This Week: John Wick: Chapter 2, The LEGO Batman Movie, South Park, and More
Beauty and the Beast Is Beautiful But A Bit Too Familiar, and Iron Fist Is a Marvel Misstep

A splendid cast work through the complications and stages of grief to provide a scathingly anti-nationalist warning from history.

"Frantz" offers a sympathetic, if dark, look at the awful wake of war, at the cost of institutional violence, as well as the cost of surviving.

Ozon's latest is a twisty-turny post-War mystery - think 'A Very Long Bereavement' - that boasts a kaleidoscope of quiet emotions. It unfolds slowly, but rewards patience with strong performances and a swooning third act.

There's a pleasing symmetry to this story - lie is matched by lie, journey by journey - and Beer's silky self-possession is utterly beguiling.

François Ozon is a master at taking apart the French chattering classes, but here he attempts an almost classical piece of film-making in black and white, French and German, a tangled tale of love and friendship.

Frantz is the work of a rascal, but a rascal in an unusually reflective frame of mind. Even with its mysteries solved, you can't help but keep turning it over.

Ozon modernizes the Merchant Ivory in swell ways, too - it might be a chaste movie but his queer heart beats hard under all of those stiff uniforms. Fassbinderian flatness and absurdity peeks around every corner

Relative newcomer Paula Beer should unquestionably have filmmakers knocking on her door after her performance here.

Disguised as period costumes and sumptuous monochrome cinematography that bursts in to color in pivotal moments, but the film holds some sinister undertones of lost innocence and pain/joy of growing up.

These mood swings make this costume drama very much of the moment.

It's a quietly devastating work that follows an unpredictable and touching path that teaches us a great deal about grieving and learning to live again.

For Ozon, Frantz is an intriguing change of pace, a period piece in another language, and with straightforward but evident depth... But you'll be hard pressed to remember much about it beyond the stirring presence of Paula Beer.

Unusually plotted and beautifully acted period piece with stunning black and white photography (and small, wonderful moments in colour). There's a lot of great subtext and subtle parallels in the shifting story, and it has one of the most perfect endings I've seen all year.