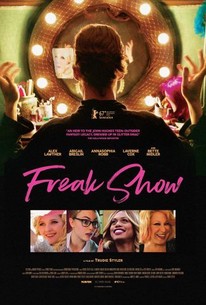 Critics Consensus: Freak Show relies on engaging performances and obviously good intentions to cover for its clichéd story and uneven direction -- and for some viewers, it may well be enough.

Critics Consensus: Freak Show relies on engaging performances and obviously good intentions to cover for its clichéd story and uneven direction -- and for some viewers, it may well be enough.

Critic Consensus: Freak Show relies on engaging performances and obviously good intentions to cover for its clichéd story and uneven direction -- and for some viewers, it may well be enough.

Could Billy Bloom be like everyone else if he wanted to? It would certainly save him a whole lot of trouble. But he has absolutely no desire to be like them. When others call him theatrical, he takes it as a compliment; when his classmates feel provoked by his drive to be different, it only motivates him further. 'The nail that sticks out gets hammered down', his father warns him. That does not deter Billy from deciding to run for homecoming queen. Somewhere in-between David Bowie, Lady Gaga, Freddy Mercury and Oscar Wilde, in the transgressive space of pop culture and dressed up as a high school comedy with wit, heart and a dazzling cast, Freak Show is about the violence of conformity and the power of self-determination.

It has all the nuance of a sharpie-scrawled slur on a locker. It's pacing is atrocious with scenes colliding together like drunken brunchers, without grace or intention.

It's hear is absolutely in the right place... I wish I liked it more. I found the film itself was very clumsily told.

It's good natured and well intentioned, but you end up wishing that Styler's directorial decisions were even half as bold as Billy's wardrobe.

It barely scratches the surface of the complex themes that it wants to explore.

Lawther is subtle. The film? Not so much.

This movie really does have everything you can need in an LGBT+ film - it's life-affirming joy that makes you want to head straight back into the movie theatre.

It's not terrible, just irritating.

At its core, watchable.

In the end, I still enjoyed it because there were a lot of fabulous things and a lot of heart.

It may be archly made by first-time feature director Trudie Styler (aka Mrs Sting), but it's also beautifully anchored in another richly detailed, deeply committed performance from Alex Lawther.

The over-arching themes of Trudie Styler's debut feature, Freak Show, are tolerance, inclusion and acceptance, and they're pretty much impossible to argue with.

There are no featured audience reviews yet. Click the link below to see what others say about Freak Show!