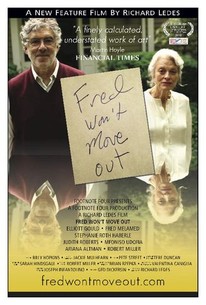 With levity and sadness, two grown children and their aging parents struggle with the decision whether the older generation should stay in the house where they have lived for fifty years. Shot in the house where the director's parents lived for close to fifty years shortly after they moved out, the film's semi-autobiographical story is memorably acted by a small ensemble cast led by Elliott Gould. Shot in sequence in three weeks with a heady mix of improvisational work by both author Richard Ledes and his cast, the film's personal approach to its subject captures a universal story uniquely told. -- (C) Official Site

It has a great many shots of trees, leaves and insects and some story gaps.

There is recognizable pain throughout Ledes' film. Yet it never pushes through to anything beyond a surface portrait.

This carefully observed slice of life is dragged down by the dreary and distracting hand-held camerawork.

Except for a subplot about a missing cat that suggests that Fred may be considerably dottier than he appears, the movie gets almost everything right about the uncomfortable moment when grown children are forced to be their parents' parents.

Mostly, it captures how old age decimates even the people who don't suffer from it.

This thoughtful but exceedingly modest miniature will be best nursed within the festival circuit.

There are no featured reviews for Fred Won't Move Out at this time.