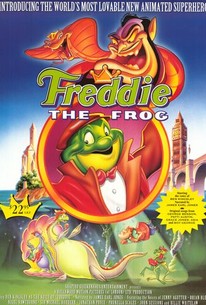 A steamer trunk full of the voices of British acting greats (Ben Kingsley, Billie Whitelaw, Michael Hordern, Brian Blessed, and Jonathan Pryce) enliven this absurd pop-cartoon parody of the James Bond films. In a prologue taking place in a faraway time, a widowed magician-king (voice of Michael Hordern) and his son, Prince Freddie (voice of Ben Kingsley) live in their lonely castle. Freddie's mean aunt Messina (voice of Billie Whitelaw), dead-set against Freddie becoming king, kills his father and transforms Freddie into a frog. Freddie escapes the wrath of Messina by jumping into the sea. Several hundred years later, Freddie is now living in modern day Paris -- a six-foot-tall amphibian with the moniker Secret Agent F.R.O.7. Messina, too, is still around causing mischief, joining forces with an arch-villain named El Supremo (voice of Brian Blessed) in a scheme to shrink Big Ben. Freddie, alerted to Messina's nefarious plans, gathers his fellow agents Daffers (voice of Jenny Agutter) and Scottie (voice of John Sessions) together, planning to hide out in Big Ben and surprise the evil doers when they are set to strike at the much-loved British landmark.

Ben Kingsley
as Freddie the Frog

Billie Whitelaw
as Messina
View All

Critic Reviews for Freddie as F.R.O.7

There are no critic reviews yet for Freddie as F.R.O.7. Keep checking Rotten Tomatoes for updates!

Audience Reviews for Freddie as F.R.O.7

There are no featured audience reviews yet. Click the link below to see what others say about Freddie as F.R.O.7!