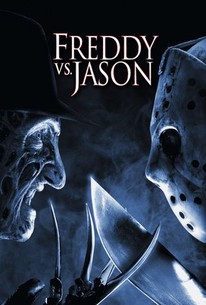 Critics Consensus: Fans of the two horror franchises will enjoy this showdown. But for everyone else, it's the same old slice and dice.

Critics Consensus: Fans of the two horror franchises will enjoy this showdown. But for everyone else, it's the same old slice and dice.

Critic Consensus: Fans of the two horror franchises will enjoy this showdown. But for everyone else, it's the same old slice and dice.

Rumored and anticipated for years, the two biggest icons of the slasher genre finally meet in Freddy Vs. Jason, the eighth entry in the Nightmare on Elm Street saga and the 11th film in the Friday the 13th series, though with Jason X taking place in the future, it should be noted that the events of this film take place after the ninth film Jason Goes to Hell. And it is hell where Freddy Kreuger (Robert Englund) and Jason Voorhees (Ken Kirzinger, donning the hockey mask for the first time in a controversial snub against series veteran Kane Hodder) finally become acquainted. Banished there for eternity, Freddy devises a plan to manipulate Jason into continuing his work, hacking up the teenagers of Elm Street. All goes well at first until Jason realizes he's been duped by "the dream master" and is none too pleased. Coaxed by surviving teenagers Will (Jason Ritter), Lori (Monica Keena), and Kia (Destiny's Child's Kelly Rowland), Jason and Freddy descend upon Crystal Lake for a mano a mano battle royal. Helmed by Hong Kong director Ronny Yu (Bride of Chucky, The Bride With the White Hair), Freddy Vs. Jason features the director of the first Friday film, Sean S. Cunningham serving as producer. ~ Matthew Tobey, Rovi

Jason Ritter
as Will, Will Rollins

Odessa Munroe
as Girl at Lake

Critic Reviews for Freddy vs. Jason

Director Ronny Yu loses energy when it shifts to the dumb teen protagonists, and the script faithfully wallows in cliches so ridiculous they border on Scary Movie territory.

It's pretty obvious where director Ronnie Yu's sympathies lie. Still, he can't find a satisfactory resolution to that old teaser about an implacable force vs the immovable object: how to kill off your cash cow and milk her too.

It may not be an all-time classic, but it's better than a poke in the eye with a sharp blade/finger.

It's completely daft, and the one-liners are by now just plain cheesy, but there's a good deal of gore to keep the faithful amused, if not completely happy.

It's bloody, it's loud, it's gratuitous, and it's ridiculous. Sweet.

Sure it doesn't have the best acting, narrative, or even the best effects, but it offers audiences a return to slashers of old - and well, a damn good time.

It's been quite some time for either of these franchises, but this chaotic mashup has once again figured out an entertaining balance between violence and humor.

The clash between the two iconic killers is far from relevant. It's just an excuse for drinking beers and laughing with a movie in the background. [Full review in Spanish].

An otherwise inoffensive, pretty mess of a film that doesn't diminish either the Friday the 13th or Nightmare on Elm Street franchises.

[W]hile not a film masterpiece by any means, Jason vs. Freddy is destined to become a cult classic and a box office hit.

It is good that they did not commit the stupidity of lowering the gore to get a more generous age rating in the United States. [Full Review in Spanish]

Audience Reviews for Freddy vs. Jason

Well it had to happen at some point and I was always game for it, finally the two supernatural death dealers clash. The only thing that instantly springs to mind when writing about this is when will I see Michael Myers, Pinhead, Ash, Leatherface or Chucky join in on this horror icon mash? You'd think the plot behind this would be silly but it actually kinda works in my opinion. Freddy seems unable to get it up anymore, he can't scare kids because everyone has forgotten about him. So he hatches a plan that involves raising Jason from the dead to bring terror back into kids lives hoping they will assume its him. Unfortunately for Freddy, Jason gets carried away and is killing way too many and spoiling Freddy's catch, thusly a fight ensues. So yes just like 'AvP' this is merely an excuse to see two iconic characters fight, the only difference is this film sticks to its trusted formula and delivers plenty of carnage. Now I'm not saying this carnage is worthy of praise, lets be frank we've seen it all before, but at least you get what you expect with no beating around the bush. Its all about the kills, Freddy does what he does best with his creepy dreamy imagery whilst Jason stomps around and hacks teenagers up. There isn't anything particularly ingenious or original going on here, the teen kills aren't exactly new and fresh and the adults running around trying to solve the issue do exactly the same thing they always do. I guess the fun part is seeing Jason upset Freddy by taking fresh kills away from him and causing tension between the two, inevitably this does result in small touches of dark humour which is cool. Its definitely a much better looking flick than most of the previous incarnations, the productions values are clearly quite high as its all very glossy. My only concern was maybe a bit too glossy, could of done with a hint of grit or that classic low budget feel perhaps. For shame on the decision to use CGI blood spurts in a few places, that's not cool at all and a worrying modern trend. Also one or two moments in the heat of battle do become a bit too farcical for my liking, just loses its edge...not that it was overly scary in the first place of course. End of the day if you're not a fan of gory slasher flicks or you don't follow them much then this isn't gonna change your mind. On the other hand if you're a fanboy or like me you simply like the two franchises then I think you'll like this a lot. Bottom line all this is really is fan service, but surprisingly its much better than you'd think. Silly thing is both of these characters are basically invincible and can't be killed, you can do virtually anything to either of them and they will still come back. So in theory it can keep going forever which does make the whole premise kinda daft really, at no point was I ever thinking that one of them would actually win. We all know and accept this to a degree but it just makes the whole battle a bit pointless really, at least Jason didn't team up with the kids against Freddy, which it was slightly hinting towards near the end. For lack of a better term...it does exactly what it says on the tin, and that's deliver a tidal wave of stereotypical killings and setups but with the huge added bonus of seeing both Freddy and Jason slug it out. OK I admit it...its pretty much completely for the fanboys, but if you're a fanboy then get that handcream ready cos its geekgasm time!

A generally horrible story with so much video game type of action and CGI that it's instantly annoying. Speaking of annoying, these teenagers got on my nerves. It was really quite surreal to watch Freddy and Jason fight, though. And they had such a stupid reason too. I only gave this movie the rating I did because of how scary I felt it was. Not a good movie, but it did creep me out.

A fantasy match-up that doesn't live up to the hype. Freddy vs. Jason pit two iconic slashers and it's bloody, disdain and overall, predictable. The ensemble (aside from the slashers themselves) are simplistic and do no good in even hyping up the confrontation. 2.5/5

The match up that many people had been waiting for! It's not really that great of a movie if you don't treat it like a genre entry, but it is admittedly a fun little guilty pleasure. Plus, it's great seeing two major horror titans go at it, just like in the monster mash movies of old. Freddy Kruger is no longer the menace he once was, so he goes through a hair-brained scheme to regain control on Elm Street. He uses Jason Vorhees, tricking poeple into thinking it's really Freddy. Problem is, Jason won't stop, so Freddy has to go in and handle things himself. The film delivers with the gore, but a lot of the humor is very hit and miss, with plenty of obnoxious groaners and annoying moments. The effects are at least well done, and I liked how they did deliver a good showdown, and, as far as the ending goes, well, that's probably the best possible way they could have done it since it would have been impossible to please everyone. Bottom line, if you like Freddy or Jason, then give it a watch.