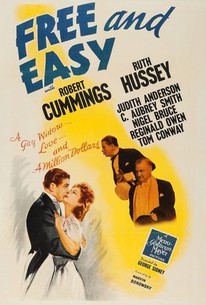 This brief (56-minute) MGM B-picture was adapted from Ivor Novello's play The Truth Game. Naturally, a few plot twists and supporting characters had to be eliminated, but at its base, the film follows the original plotline with reasonable fidelity. Hoping to land wealthy wives, a father-and-son team of sharpsters, Max and Florian Clemington (Robert Cummings and Nigel Bruce), pretend to be members of the landed gentry. Max romances the much-older Lady Joan Culver (Judith Anderson) before finding true love in the form of pretty heiress Martha Gray (Ruth Hussey). Imagine his embarrassment when Max discovers that Martha is as big a phony as he! Because of the 1941 Free and Easy, Buster Keaton's same-named 1930 vehicle had to be retitled Easy Go on television. ~ Hal Erickson, Rovi

C. Aubrey Smith
as The Duke

Frederic Worlock
as Manager
View All

Critic Reviews for Free and Easy

There are no critic reviews yet for Free and Easy. Keep checking Rotten Tomatoes for updates!

There are no featured reviews for Free and Easy at this time.