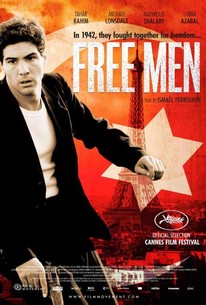 In German-occupied Paris, a young unemployed Algerian named Younes (played by break-out star, Tahar Rahim) earns his living as a black marketeer. Arrested by the French police but given a chance to avoid jail, Younes agrees to spy on the Paris Mosque. The police suspect the Mosque authorities, including its rector Ben Ghabrit, of aiding Muslim Resistance agents and helping North African Jews by giving them false certificates. At the Mosque, Younes meets the Algerian singer Salim Halali, and is moved by Salim's beautiful voice and strong personality. When Younes discovers that Salim is Jewish, he stops collaborating with the police and gradually transforms from a politically ignorant immigrant into a fully-fledged freedom fighter. -- (C) Film Movement

Youssef Hajdi
as Résistant 2
View All

It's a thoughtful and thought-provoking piece of filmmaking, which repays repeat viewing.

[A] socially nutritious, unimpeachably competent, but shapeless and sluggish wartime drama about the little-known collaboration between North African immigrants and the French Resistance.

The tension doesn't grip as it should, but it's a worthwhile reminder of a moment of Muslim-Jewish co-operation.

Free Men tells the little-known true story of a mosque in Paris that sheltered Jewish citizens hiding from the authorities during the second world war.

Passionate if insubstantial period piece. Rahim is the real deal, though.

Ferroukhi fails to communicate much of the fear and paranoia of living in an occupied city.

Writer-director Ferroukhi based his movie on little-known stories of Muslim men and women who joined the French Resistance.

Economical in its craftsmanship and production values, and effective with its lead performance.

Its narrative is efficiently told and an air of oppression palpable.

A high point for any film is to be graced with the presence of Michael Lonsdale.

They are people worth knowing about and pondering in our present, conflicted times.

I kept hoping to get caught up in it in more than a coolly intellectual way, but that never happened.

In occupied France, Younes(Tahar Rahim) works in the black market. During an immigration dragnet, he is arrested while his cousin Ali(Farid Larbi) escapes. Younes is given a choice, either cooperate with the authorities and spy for them or be deported. He chooses to stay and is assigned to infiltrate the mosque presided by Ben Ghabrit(Michael Lonsdale). It is there that Younes encounters Salim(Mahmoud Shalaby), a young singer, using a dabrouka as a calling card. "Free Men" has a few things going for it, like its unique angle on occupied France, just as nationalism for North Africa was starting to kick into gear with immigrants being pulled in two separate directions at once. But even with a milieu as neat as this one, you need a decent story which is missing here. Plus, the lead character is more than a little lacking.(Whether this is because Younes is only a composite character and Salim and Ben Ghabrit were real people is up for debate.) But then somebody should have told Michael Lonsdale, possibly miscast as he is, that this wasn't his movie, as he steals it simply through the careful application of quiet dignity.

Really well done, and an interesting look at Paris under the Nazi heel, especially as the terror strikes Parisian Jews. I found the Islamic music trying, others may not, but the film is a low-key A list French production. Great actors. Great retelling of history.