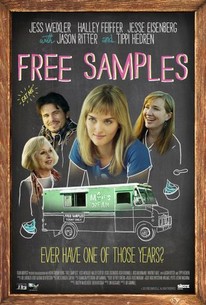 Jillian (Jess Weixler), a sardonic, bitter, verbose, hungover, law-school dropout, has a really bad day working on an ice-cream food truck as a favor to a friend. She treats her bizarre customers with the utter lack of respect she thinks they deserve, but the day turns out to be an important one for her as an old relationship comes crashing down, while another one might just be starting up. Jesse Eisenberg and Tippi Hedren co-star in this indie comedy. ~ Perry Seibert, Rovi

Abigail McFarlane
as Patricia
View All

A modest but pleasant small-budget movie with two bits of laziness in the script, but one particularly sweet performance that makes up for them.

An angry indie that favors hollow ridicule over credibility.

Weixler is a delight, and director Tom Gammill captures the right level of deadpan to pull this off.

"Free Samples" is a film about wasting time, and it feels like it.

A deeply unpleasant micro-budget indie that has no clue how to extrapolate a single location into an entire feature, Free Samples is an ugly bit of work.

Never pretending to be something that it isn't, this film is slight and satisfying even if it, at times, seems more like a thesis film than the feature that is intended.

A modest pleasure that greatly benefits from Weixler's charismatic presence.

After leaving law school, Jillian(Jess Weixler) spends most of her time hanging out with her friends back in her hometown. Waking up one morning after a night of drinking and socializing, she finds an empty cowboy hat in the bed next to her. Making matters even worse is her friend Nancy(Halley Feiffer) drafting her to hand out free samples from her ice cream truck all day. "Free Samples" does itself no favors by starting with the very disturbing sight of Jesse Eisenberg wearing a cowboy hat. Even if it was not slapdash and episodic, the movie would have had a hard time recovering from that. Plus, the movie is forced in being judgmental in showing what Jillian's life would be like if she does not get her life back together, instead of being relaxed in respecting a character's need for a break. On the plus side, there is a very neat turn from Tippi Hedren but that comes too little, too late.