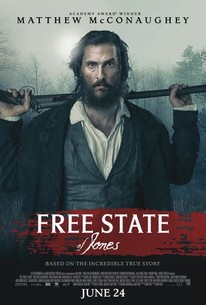 Critics Consensus: Free State of Jones has the noblest of intentions, but they aren't enough to make up for its stilted treatment of a fascinating real-life story.

Critics Consensus: Free State of Jones has the noblest of intentions, but they aren't enough to make up for its stilted treatment of a fascinating real-life story.

Critic Consensus: Free State of Jones has the noblest of intentions, but they aren't enough to make up for its stilted treatment of a fascinating real-life story.

Directed by four-time Oscar (R) nominee Gary Ross and starring Oscar (R) winner Matthew McConaughey, Free State of Jones is an epic action-drama set during the Civil War, and tells the story of defiant Southern farmer, Newt Knight, and his extraordinary armed rebellion against the Confederacy. Banding together with other small farmers and local slaves, Knight launched an uprising that led Jones County, Mississippi to secede from the Confederacy, creating a Free State of Jones. Knight continued his struggle into Reconstruction, distinguishing him as a compelling, if controversial, figure of defiance long beyond the War.

Jane McNeil
as Woman in Courtroom

Will Beinbrink
as Farmer

Because Free State of Jones concentrates so singularly on making [Matthew] McConaughey the hero of the film, it ends up being a series of missed opportunities.

While all the performances are solid, there's too much of a distance from the setting of the story to truly create an immersive experience between the audience and the film.

Free State of Jones stars Matthew McConaughey, with his smooth Southern lilt and cool demeanour, as Newton Knight, a battle-weary Confederate soldier who deserts, deciding that he no longer wants to fight for the rights of slave owners.

A fascinating and genuinely important period in American history is underserved here by an inelegant structure and unwieldy running time.

Free State Of Jones is an American Civil War-era saga that would surely have worked better as a box set TV drama than as a feature film. There is just too much information to pack in.

This movie doesn't shy away from the brutality or the heinous violence.

McConaughey's intensity and ability to catch Knight's emotions in his face keeps the viewer riveted to his eyes.

Just as much history can be found in the eight minutes required to listen to Guns N' Roses' "Civil War" as can be derived from the 140 minutes necessary to watch Free State of Jones.

The film, directed by Gary Ross, rambles some...but rightfully shines a light on our shameful past of slavery, which Juneteenth celebrates the end of Saturday.

While it might not be the most engaging film for a lot of people, it's refreshingly atypical.

Sometimes in a enervatingly slowly pace, this film tells a pretty fascinating, untold story. There are moments of brilliance, but while some parts drag out forever, others feel rushed. In the end, a lot of developments are merely covered in text captions. Overall a decent attempt that could have had even more of an emotional impact with a more condensed script. McConaughey is not to blame, he delivers the goods, as always.

Matthew McConaughey stars in the extraordinarily compelling biopic the Free State of Jones. The film follows the life of Newt Knight, a medic in the Confederate Army who deserted to protect his hometown from looters and ended up leading a rebellion made up of deserters and runaway slaves. McConaughey gives an excellent performance and brings a lot of charisma to the film. However, the storytelling is a bit problematic, as it takes on too much; skipping around a lot and working in a subplot about Newt's great-grandson. However, the production values are especially good, giving an authentic look and feel for the time period. And the drama is really intense and exciting. Free State of Jones has a few problems, but overall it's a compelling film about a fascinating piece of American history.

"Free State of Jones" is an interesting history lesson -- although lacking the panache and dynamism of an actual history lesson. The script is plodding and unfocued, and the story is puzzlingly episodic. The costumes and locations are good, but McConaughey oozes contemporary morality and seems ill-suited for this period piece. The only noticably good acting was from Mahershala Ali. The film might have as lief been entitled "Talent-Free State of Jones". Spend your ticket money on popcorn and just hang out in the theater lobby, kids. This one's a stinker.

Well meaning and somberly recreated, Free State of Jones is a historical drama that wants to illuminate the story of Newton Knight (Matthew McConaughey) who deserted from the Confederate army and seceded from the very people who seceded from the United States. Knight and the people of Jones county Mississippi declared themselves independent and awaited the consequences. At first the Confederate army is annoyed, but as armed skirmishes increase and Knight's team swells with poor farmers and runaway slaves, garnering Robin Hood-esque folk hero status, you're expecting an escalating level of force that will doom Newton. We've seen this kind of historical drama before where men (usually men) of courage and politics ahead of their time are stamped out by the forces of oppression and we then celebrate their noble sacrifice. I kept waiting for Jones to go this route, and then (slight historical spoilers) the Civil War ends and instead the last half hour is an episodic history tour that includes the rise of the KKK, registering freed black men for voting, and early voter suppression acts. There is also a storyline strewn throughout that takes place in a 1940s Mississippi courtroom. At first you're left scratching your head about the flash forwards, and then the connections come to bear. We're watching Knight's (great?) grandson and his legal troubles because the courts don't know whether he's the byproduct of Newton's first wife (Kerri Russell), who left him, or his common law second wife (Gugu Mbatha-Raw), a former slave. It's a storyline that just doesn't really gel with the movie as a whole and really only serves to remind you that 100 years later Mississippi was still a pretty terrible place to live. Free State of Jones' failure is that it doesn't make this slice of history emotionally engaging. We don't get a strong sense of whom Newton is as a person except for his 99% rabble rousing. His relationship with Mbatha-Raw's character is the most engaging part of the film given its inherent conflict, and I'll credit writer/director Gary Ross (Seabiscuit) with how restrained he is about dealing with her sexual abuse from slavery. The relationship is treated very tenderly and Mbatha-Raw aces her scenes. Also warning to dog lovers: there are several sequences of violence against man's best friend that will be hard to watch. Free State of Jones works better as a history lesson rather than as a fully formed movie. Nate's Grade: C+