Freebie and the Bean1974 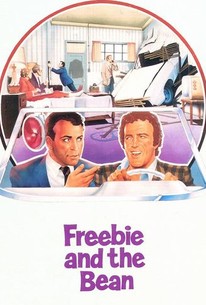 Critics Consensus: A sour blend of misguided comedy and all-out action, Freebie and the Bean is a buddy cop picture that's far less than arresting entertainment.

Critics Consensus: A sour blend of misguided comedy and all-out action, Freebie and the Bean is a buddy cop picture that's far less than arresting entertainment.

Critic Consensus: A sour blend of misguided comedy and all-out action, Freebie and the Bean is a buddy cop picture that's far less than arresting entertainment.

Freebie and the Bean Photos

Freebie (James Caan) and the Bean (Alan Arkin) are a pair of San Francisco cops. Red Meyers (Jack Kruschen) is the mobster whom Freebie and the Bean would like to see behind bars -- or, failing that, six feet under. Nothing stands in the way of the cops' pursuit of Meyers, meaning that private property is given quite a going-over in this picture. The film's most memorable scene finds Freebie and the Bean crashing their car into a poor schnook's living room. TV favorites Loretta Swit and Valerie Harper play the only female roles worth mentioning. The racist and sexist humor in Freebie and the Bean may not go over as well today as it did in the politically incorrect early '70s.

Maurice Argent
as Tailor
View All

Critic Reviews for Freebie and the Bean

Robert Kaufman wrote the screenplay from a story by Floyd Mutrux, who is credited as the executive producer, and both men should be forced to spend the next few decades watching what they have wrought.

The most schizoid film recipe of current memory. It is as if several different cooks had tried to poison the broth.

Too often, producer-director Richard Rush startles us with injected scenes of violence that quickly turn comedic happenings into scenes of dismaying grimness.

Neither screen writer Robert Kaufman nor director Richard Rush could decide if "Freebie and the Bean" was to be a comedy or a blood-and-guts melodrama. For every guffaw there is an equal and opposite scene of someone being shot clubbed or maimed.

One of the most reprehensible film-yarns ever to subvert the original designs of the Keystone Kops. Also, it is, at moments, a talented and hilarious movie, which simply confounds the muddle.

An offbeat cop flick and one of the year's funniest.

These two gifted actors... totally fail to make their bestial roles charismatic or even moderately appealing.

The movie is such a hopeless confusion of styles and tones and wasted effort and undirected energy that it requires a great deal more than good performances to save it.

...boasts a pervasively irreverent sensibility that's reflected most keenly in the behavior of its two protagonists...

One of those obnoxious wisecracking buddy cop movies about dimwit cops that fails to be funny.

The humor is tasteless and racist, but the action scenes are fantastically choreographed and executed.

The best darn movie of the seventies you've never seen.

Audience Reviews for Freebie and the Bean

Thoroughly awesome, the first real buddy cop film is also one of the best. Totally ridiculous and full of shenanigans.

I don't really know if Freebie and the Bean classifies as the first buddy cop film, but if it is, it's the best one I've ever seen. It's hard to believe that a comedy like this starring Alan Arkin and James Caan as a duo was ever made, but it was. The dialogue feels fresh and must have been adlibbed. The caper isn't much of a caper but that isn't really the point. The point is following these two lunatics around in their daily lives from one catastrophe to the next and enjoying every minute of it. The Warner Archive put this out not too long ago with a terrific picture but only the trailer as an extra. I hope this gets some special edition love sometime soon as it's a terrific little gem.

Freebie and the Bean Quotes