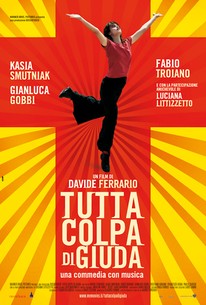 An ambitious young theater director takes some serious liberties with theology and accepted history as she stages a new play behind bars in this offbeat comedy from writer and director Davide Ferrario. Irena (Kasia Smutniak) is a forward thinking director who travels to a penitentiary in Turin to stage a new play at the invitation of chaplain Father Iridio (Gianluca Gobbi). Irena has been told she will have complete creative control over the production, but she discovers as long as she's using inmates as cast and crew, she has to deal with Iridio and warden Libero (Fabio Troiano), who have some fairly strong ideas of their own. Iridio persuades Irena to stage a new interpretation of the life of Christ and volunteers to star; Irena warily agrees, but when she discovers that no one is willing to play Judas (the notion of betrayal is especially unpopular in a prison), Irena hits upon a radical idea -- rewriting the Passion Play so that Judas doesn't appear in the story and Jesus isn't crucified. Iridio and his associate Sister Bonaria (Luciana Littizzetto) are appalled and begin fighting Irena at every turn, but the director has gained a powerful ally now that she's romantically involved with Libero. Tutta Colpa Di Giuda (aka Freedom; the original titles translates as "It's All Judas's Fault") was an official selection at the 2009 Karlovy Vary International Film Festival.

There are no critic reviews yet for Freedom. Keep checking Rotten Tomatoes for updates!

There are no featured reviews for Freedom at this time.