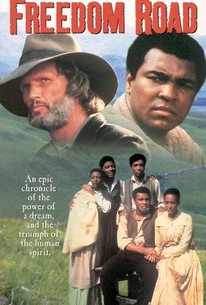 Muhammad Ali made his TV-movie dramatic debut in this adaptation of Howard Fast's novel Freedom Road. Though some of the names are changed, the story concerns the true-life efforts of senators Charles Sumner and Thaddeus Stevens to bring political order and racial equality to the post-Civil War South. Ali is cast as Gideon Jackson, an ex-slave who is elected to the U.S. senate during the Reconstruction Era. Interestingly enough, the character upon whom Jackson is based was depicted as the villain of D.W. Griffith's 1915 Civil War epic Birth of a Nation. Just as Griffth offered his own biased slant on the facts, so too did Fast rewrite history to promote his own political ideology. As for Muhammad Ali, his performance is no threat to Olivier, but he acts with sincerity and a commendable lack of bravado. Made for TV, Freedom Road represented the final film effort of Czechoslovakian director Jan Kadar. It was first telecast in two parts on October 29 and 30, 1979, an event that warranted a cover story in TV Guide.

Tom Delaney
as Will Boone

Robert Bloodworth
as Mayor at Convention

There are no critic reviews yet for Freedom Road. Keep checking Rotten Tomatoes for updates!

There are no featured reviews for Freedom Road at this time.