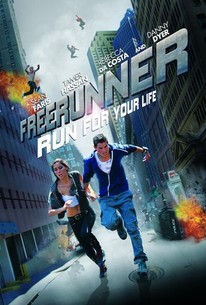 A group of freerunners race for their lives after being outfitted with explosive collars, and given 90 minutes to reach the other side of town or die trying. Ryan (Sean Faris) and his fellow parkour enthusiasts are used to taking big risks, and they make big money pushing the boundaries of physical endurance. But when Mr. Frank (Danny Dyer) enters the picture, Ryan's favorite pastime turns deadly serious. Mr. Frank and his friends are gamblers with no regard for human life, and their latest bet is which of the runners can navigate their urban jungle the fastest. With ticking time bombs strapped around their necks, the runners must find their way across the city in less than 90 minutes. The winner will receive a cool $1 million, and everyone else will get a splitting headache. When Ryan learns that his girlfriend has been kidnapped as well, he quickly realizes that he's got his work cut out for him. ~ Jason Buchanan, Rovi

There are no critic reviews yet for Freerunner. Keep checking Rotten Tomatoes for updates!

"This actually had a good concept. If only they would have gone about it a different way. Like making it to where some big time gangster or some big honcho wanted something stolen and hired these guys to do it. I was impressed with their skills, but not so much with the movie. Oh, and the acting.. Jeez. It was not stellar at all. Sean Faris isn't a bad actor. He just has a bad time getting into a lot of good movies. See it for these guys impressive moves, but that's about all."

[img]http://images.rottentomatoes.com/images/user/icons/icon14.gif[/img] Putting aside the ridiculousness of it's considerably imaginative premise, Freerunner fulfilled all of my expectations sucessfully. It didn't add up to anything uproaringly remarkable but it's tense and filled with some good scenes of action. The acting is also pretty decent for a film of it's kind, even Danny Dyer was pretty good. The environments of the races are interesting and the shaky camera work is good helping it become even more tenseful. It's forgettable and silly but it's fun while it lasts.