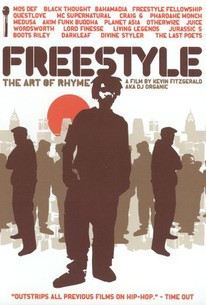 The pioneers and current purveyors of the vibrant art of freestyle hip-hop mingle in this hour-long documentary about the origins and future of the style. Shot in New York City, L.A., and San Francisco, Freestyle alternates between informed commentary -- by rap stalwarts such as The Last Poets, Mos Def, Supernatural, and Cut Chemist -- and impromptu vocal performances. Throughout, the filmmakers trace the social consciousness of the genre and suggest that it may be making a comeback. Director Kevin Fitzgerald previously made his name as a deejay on L.A. radio station KPFK.

The skills on display in Freestyle are too varied and idiosyncratic for one movie to contain, but this one at least offers a heady, rousing education in an art form that is too often misunderstood.

Even if you have no previous interest in or extensive knowledge of hip-hop, Freestyle will draw you in, accomplishing that rare feat of making the creative process interesting while also telling a story.

An engaged and knowing look at the underground world of improvised rap, concentrating on artists less interested in commercial success and cutting records than in the 'spontaneous right now' of 'nonconceptual rhyme.'

Dispels myths about the 'gangsta' aura that clings to rap and shows this poetry of the streets in all its different forms: social protest, entertainment and aggression.

Watching some of the best freestylers riff like Charlie Parkers with thesauruses is often breathtaking.

The only downside of watching the movie? The rhythm gets you, and you're likely not going to want to sit still in your seat.

Not since the groundbreaking Wild Style has there been a hip-hop film this exciting to watch.

A thoughtful overview of a major musical movement, from its churchy roots to its urban present, from its aggressive front to its spiritual underpinnings.

The first full movie that I've seen on YouTube! It's a very good and thoughtful overview of what makes freestyle rhyming a true artform. Has some good footage of battles, flow sessions, and cyphers, and gives an interesting history as to how it all started. It doesn't really offer any new insight into technique, it's more of a history and overview targeted mostly at people who don't really know what freestyle rhyming is. I selfishly would have liked to see more footage of well-known artists back in their freestyle days, just because it would have held my attention better. But it does show some great sessions from MC Juice, Mos Def, and others. Check it out, the whole documentary is on YouTube.