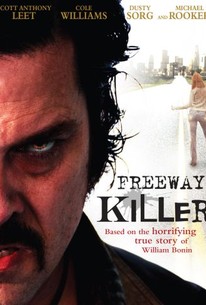 The shocking true story of serial killer William Bonin (Scott Leet), who stalked California freeways in search of victims to murder, mutilate, and rape from May of 1979 through June of 1980. A deceitful charmer with a hair-trigger temper, Bonin could go from benevolent citizen to murderous psychopath in the blink of an eye. Throughout the course of his crime spree, the killer and his small group of deeply-disturbed accomplices succeeded in claiming at least 21 lives before their reign of terror came to an end. Tipped off by a former associate who suspected Bonin may be the "Freeway Killer" authorities had been searching for, police promptly began staking Bonin out, and awaited the perfect moment to make their move.

There are no critic reviews yet for Freeway Killer. Keep checking Rotten Tomatoes for updates!

There are no featured audience reviews yet. Click the link below to see what others say about Freeway Killer!