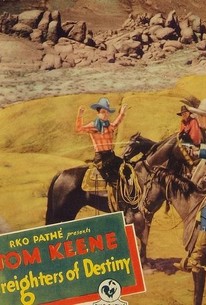 The title of this RKO western refers to the wagons which bore settlers Westward during the mid-19th century. Following in his father's footsteps, Tom Keene guides a wagon train through perilous territory, facing constant danger at the hands of a scurrilous outlaw gang. The bad guys are in the employ of a "respectable" banker, who wants to get his mitts on the freighter franchise and will stop at nothing to achieve his goal. Barbara Kent is the eminently protectable heroine, while Billy Franey, a fixture of the Tom Keene westerns of the early 1930s, provides comedy relief. Costing a paltry $39,000, Freighters of Destiny earned back its cost more than tenfold. The film was partially remade in 1940 as the Tim Holt western Wagon Train. ~ Hal Erickson, Rovi

Critic Reviews for Freighters of Destiny

There are no critic reviews yet for Freighters of Destiny. Keep checking Rotten Tomatoes for updates!

Audience Reviews for Freighters of Destiny

There are no featured audience reviews yet. Click the link below to see what others say about Freighters of Destiny!