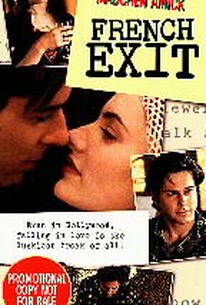 In this old-fashioned screwball comedy, two Hollywood screenwriters have numerous disastrous, heated encounters before they realize the obvious and find romance. It all begins in catastrophe-ridden LA after yet another earthquake. Zina is driving her car on the freeway when she runs into Davis while trying get out from under a cracked overpass. They start out civil enough but soon find themselves fighting tooth and nail over who is at fault. Later the two instant enemies find that they run into each other wherever they go, be it a trendy restaurant or a major party. When they both begin vying for the opportunity to write the same script, the fireworks begin in earnest.

Where did you say the exit was?

There are no featured reviews for French Exit at this time.