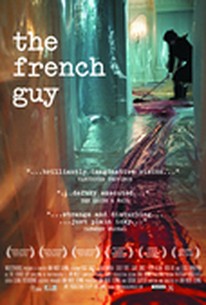 A French artist struggling to put the finishing touches on his masterpiece finds his concentration repeatedly broken by the unusual sounds emanating from his neighbor's apartment in this black comedy from The Magical Life of Long Tack Sam director Ann Marie Fleming. Immediately discharged from the hospital following her hastily executed brain surgery, Elizabeth Murray (Babz Chula) wanders the streets in a curious haze, her personality visibly affected by the botched cerebral procedure. Upon spotting the man of her dreams wandering along the beach in a similarly confused manner, Elizabeth lovingly brings the disoriented man (Tygh Runyan) back to her apartment in hopes of nursing him back to health. Following an allergic reaction to her environment that forces Elizabeth to wrap her entire apartment in plastic, a bloody mishap with her new beau quickly spirals into a murderous, and quite noisy, rampage of good intentions gone horribly awry. ~ Jason Buchanan, Rovi

Critic Reviews for The French Guy

There are no featured reviews for The French Guy at this time.