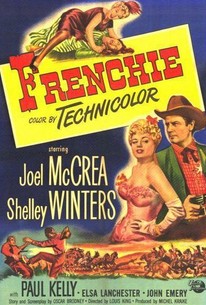 Though the title role of Frenchie goes to Shelley Winters, top billing in this period actioner is bestowed upon Joel McCrea as sheriff Tom Banning. Hoping to find her father's murderers, New Orleans gambling-house proprietress Frenchie Fontaine (Shelley Winters) sets up shop in the Wild West. With the help of sheriff Banning, Frenchie is able to locate one of the two killers. But after tracking down the second culprit, Banning finds himself facing a murder charge. Though it isn't readily obvious, Frenchie is actually a reworking of 1939's Destry Rides Again, with Joel McCrea and Shelley Winters playing variations of the characters originally essayed by James Stewart and Marlene Dietrich. ~ Hal Erickson, Rovi

Lucille Barkley
as Dealer
View All

There are no critic reviews yet for Frenchie. Keep checking Rotten Tomatoes for updates!

There are no featured reviews for Frenchie at this time.