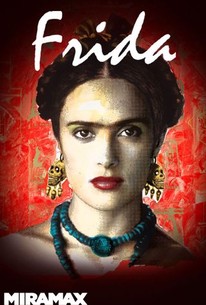 Critics Consensus: Frida is a passionate, visually striking biopic about the larger-than-life artist.

Critics Consensus: Frida is a passionate, visually striking biopic about the larger-than-life artist.

Critic Consensus: Frida is a passionate, visually striking biopic about the larger-than-life artist.

After being attached to a number of actors, directors, and producers, this long-gestating biography of one of Mexico's most prominent, iconoclastic painters reaches the screen under the guiding hand of producer/star Salma Hayek. Hayek ages some 30 years onscreen as she charts Frida Kahlo's life from feisty schoolgirl to Diego Rivera protégée to world-renowned artist in her own right. Frida details Kahlo's affluent upbringing in Mexico City, and her nurturing relationship with her traditional mother (Patricia Reyes Spindola) and philosophical father (Roger Rees). Having already suffered the crippling effects of polio, Kahlo sustains further injuries when a city bus accident nearly ends her life. But in her bed-ridden state, the young artist produces dozens upon dozens of pieces; when she recovers, she presents them to the legendary -- and legendarily temperamental -- Rivera (Alfred Molina), who takes her under his wing as an artist, a political revolutionary, and, inevitably, a lover. But their relationship is fraught with trouble, as the philandering Rivera traverses the globe painting murals, and Kahlo languishes in obscurity, longing to make her mark on her own. Frida was directed by Julie Taymor, whose Broadway production of The Lion King won her international acclaim. ~ Michael Hastings, Rovi

Saffron Burrows
as Gracie
View All

Smart, willful, and perverse, this Frida is nobody's servant, and the tiny Hayek plays her with head held high. You may want to laugh now and then, but you won't look away.

Salma Hayek finally ushered her dream project into production, but her impassioned lead performance lacks the necessary gravitas for the role, mistaking empty energy for wild fits of inspiration.

The plodding, glumly literal screenplay holds this otherwise expressive biopic back, but it's still a colourful and entertaining watch.

It wasn't a bad idea to conceive of the film as an epic, complex love story between Frida and Rivera, but the passion between them is more rhetorical than palpable...Taymor and Hayak give us only the rough sketch of a wild soul.

It would be nice to report that the subsequent film, with all of the talent and perseverance that has gone into seeing it to fruition, was worth the heartfelt efforts of all involved.

With splendid supporting turns from the likes of Ashley Judd, Edward Norton, and Geoffrey Rush, and some terrific set pieces, Taymor brings Kahlo's art to life.

The strangest of birds - a film about a Communist, bisexual, hirsute, maverick artist aimed squarely at a mainstream audience - Frida may, in fact, turn out to be more radical than it first appears.

One can imagine Taymor's glorious vision as a triumph of which Frida herself would approve.

a pity that the project paints by the numbers so much

Sporting mustcahe, Selma Hayek gives a solid performance in the otherwise conventionl and mediocre biopic of the noted Spnish artist.

Taymor conveys in imaginative cinematic fashion how for Frida, creating art and living were one and the same.

Visually brilliant biopic about an original directed by an original. Love, love, love.

A feast for the eyes...a famine for the ears. This films moments of immense beauty are almost overshadowed by the mediocre acting. While Salma Hayek certainly looks the part, there is a certain shallowness to her acting abilities that really did not do the character justice. And Ashley Judd's performance (though mercifully brief) is just painful to watch and hear. I did learn a lot about Firda's life and with that insight gained a greater appreciation for her work, but what could have been an AMAZING film with a more solid lead...ended up feeling just like a beautifully filmed vanity piece.

I never much cared for Kahlo's work. Still don't. But it made me respect the woman more. After this I can see how well suited this was for Taymor's directing style. The visual effects that worked for her here were very similar in Across the Universe. Outstanding acting and beautiful cinematography. Probably one of my favorite biopics. (Much better than Evita...)

Fascinating and insightful. Alfred Molina seems perfectly suited for the role of Diego Rivera and Hayek is simply fantastic. The dream sequence and artful animation took me by surprise. 4 and a half stars!