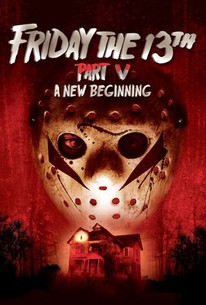 The murderous spirit of Jason Vorhees lives on in this horror sequel, although the plot hinges on the mystery of whether the killer's body actually survives. Opening with a nightmare prologue in which Corey Feldman reprises his role as Tommy Jarvis, the boy who killed Jason in the previous installment, the film jumps forward several years to when a teenaged Tommy (John Shepherd), haunted by visions of Jason returning to life, moves into a group home for mentally disturbed kids. Almost as soon as he arrives, Tommy witnesses the death of Joey (Dominick Brascia), an overweight, annoying boy who is hacked to death by psychopathic patient Vic (Mark Venturini). Although Vic ends up safely behind bars, other bodies begin to turn up -- more than 20 by the end of the film. Tommy's own violent streak, displayed when he lashes out at a fellow resident, makes him a suspect; he even doubts his own sanity. But as the bloodshed continues, Tommy finds himself allied with Reggie (Shavar Ross), the grandson of one of the home's employees, in a desperate bid to survive the carnage and find out who the killer behind the hockey mask really is. The producers of the Friday the 13th series actually planned to end it with Friday the 13th -- The Final Chapter, but the box-office success of that film paved the way for the series to continue. ~ Brian J. Dillard, Rovi

Miguel A. Núñez Jr.
as Demon

Chuck Wells
as Deputy #3
View All

The tone is crude, raunchy, and leering, with kill scenes combined with more nudity than usual.

The spiciest entry in the series, it boasts the most T&A, an incredible double homicide, a witty reference to A Place in the Sun, and yokels chopping chickens.

This one had potential but largely blows it.

If you are curious about classic '80s horror and need a gateway into the genre, though, this should be the first movie you check out.

Losing its star - and story motivation - was only the beginning of the trouble, though. Most of the rest amounted to poor decisions.

A horrible "new beginning". Paramount got greedy and this came out in theaters. [Full review in Spanish].

...falls right in line with its hopelessly inferior (and surprisingly dull) immediate predecessor...

The plot twists may offer something different from the series, actually having a little more in common with the first film than any other. However, this wasn't that original.

This one just annoyed me.

Let's make it an old ending! Enough slashing and dicing!

This is not a fun stupid movie. This is a stupid movie that makes me want to claw my skin off.

While it is safe to say none of these movies was particularly worth making, I believe Part 5 is the one that brought the least for our collective edification.

Of course they wouldn't just kill the golden goose, so they naturally had to came up with a sorry excuse for a "new beginning," but it is not even fun to watch when everything (and everyone) is so extremely irritating, the script is pure garbage and the dialogue is awful beyond belief.

This movie has annoyed me off since I was a kid. Followers of this series and viewers of the film were victimized by the old, bait-and-switch. Aspiring storytellers should be advised against the bait-and-switch, it will only alienates the audience. That, and they're never as clever as the writer thinks they are. Anyway, everyone thought that Tommy Jarvis would take over as the slasher after Jason's demise. Instead, the killer was Roy, the paramedic. Roy, the paramedic? Who? Exactly. Aside from this asinine swerve in the plot, this is about as uninspired and poorly constructed as the series gets. It feels like a generic rip off of a Friday the 13th. Then again, it's not a Jason movie, it's a Roy the Paramedic movie. Avoid.

I've gone round and round with my feelings about Friday the 13th Part 5: A New Beginning. I've never hated it for it being all a ruse and not featuring Jason at all. I actually always felt that that was a little more interesting and brought something new to the mix. The truth is that it's just not a great horror film, and doesn't really resemble one. What I've gradually come to realize is that it's nothing more than a black comedy, and an unintentional one... I think. To be fair, this film could've been left out of the series altogether and the story wouldn't have changed that much, but I find it too enjoyable to ignore it. Even though I burst out laughing at certain scenes and moments in the films in this series, this one really is, beat for beat, a comedy, and it makes me laugh pretty hard. As a horror film, it's bumblingly terrible, uninteresting, horribly shot, shodily edited and contains story & dialogue that are just egregious on all possible levels. It's very much the black sheep of the franchise, just like how Halloween III: Season of the Witch was to the Halloween series. The big difference between the two is that even though Halloween III had nothing to do with the franchise who's moniker it carried, it was actually a very solid movie. This movie isn't, but it winds up being very entertaining anyway. It's also interesting to note that the films were due to follow the storyline of Tommy Jarvis becoming the new Jason, but the nearly universal negative response caused the studio to bring Jason back. Thankfully, that change paid off and the best film of the series was soon to follow.

My favorite sequel because it captured one of those magical moments of film history where everything and everybody was so bad. No actor knows if he/she is supposed to be acting serious, scared, funny or anything. NO CLUE. Its also hilarious to me that at the end, we find out that they just killed Jason, only it wasnt Jason. It was some pedophile mortician with a pet-peeve for teenagers who fornicate loudly. So basically the end message is "Sorry, please try again!"