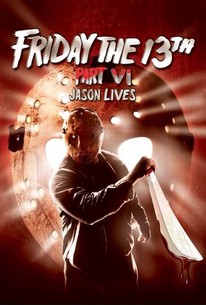 This impressive entry in the popular horror series brings back the relentless killer Jason Voorhees, this time as a supernatural zombie. Tommy Jarvis, now played by Thom Matthews, accidentally resurrects Jason when he impales the killer's corpse with a metal pole during a lightning storm. Numerous murders follow, beginning with Tommy's friend (Ron Palillo) having his heart torn out of his chest by the zombie killer. Implicated in the crimes by a mean-spirited sheriff (David Kagen), Tommy is freed from jail by the sheriff's daughter, spunky Megan (Jennifer Cooke). The cast converges on Camp Crystal Lake, which has been renamed "Camp Forest Green" by superstitious locals, in time for Tommy to send Jason back to the bottom of the lake, if only temporarily. Harry Manfredini's score is among his best, and the makeup by Martin Becker, Gabe Bartalos, R. Chris Biggs, and others is outstanding. Cooke makes an appealing heroine as Megan, although Matthews' Tommy has lost the interesting mental disturbances of previous entries and becomes just another bland hero. Tom McLoughlin's direction is effective, and the film has a memorably funny supporting turn by Bob Larkin as a grumpy drunken caretaker. Alice Cooper sings the title song, "He's Back (The Man Behind the Mask)." Although no classic, this is a solid horror film with a witty script and engaging characters. Jason would rise again to face a telekinetic teen in the disappointing Friday the 13th, Part VII: The New Blood. ~ Robert Firsching, Rovi

Thom Matthews
as Tommy
View All

The murderous Jason is back in the latest chapter of the most offensive series in film history, unless Burt Reynolds makes three more Smokey and the Bandit pictures real quick.

While there's a superficial been-there-done-that, why don't-we-just-mock-the-whole-thing quality to this entry in the series, it certainly livens up what has become by this point a stale franchise.

Of note: Electricity will figure prominently in just about every Friday the 13th entry from this point onward.

An OK entry in the series, with some welcome humor and a bravura finale.

Upscaled in special effects, but still suffering from the same bland character and story treatment. [Full review in Spanish].

A definite improvement over the fourth and fifth installments...

Although the first four sequels had their own brand of tongue-in-cheek horror, Part VI marked the first step into overt campiness of the series.

This may be my favorite of the Friday the 13th series, mainly because of the winking, insider humor; it's almost like a precursor to Wes Craven's Scream ten years later.

A deliriously fun time, with Jason at his all time meanest...

Writer-director Tom McLoughlin strives to bend the familiar FRIDAY formula into a throwback to an earlier era of horror monsters. The results are mixed...but you have to give [him] credit for trying.

Does Jason ever die? On with the franchsie.

It's kind of a nice film, and nice exploitation films are nobody's idea of a good time.

It took five crappy movies before someone finally realized that the only way to extract any fun from this worn-out formula would be to make it explicitly campy, and so this is the best chapter of the series, with a hilarious metahumor, witty dialogue and even good performances.

This film is, by far, my favorite entry in the entire series. In the film Jason is resurrected. The result is the best version of Jason that was ever created. This is the introduction of the super-human, methodical zombie version of the character. It's a pleasure watching Jason slaughter a cast of watchable victims, with purpose. The other welcome addition, was the warped, and intended, sense of humor. The comedy worked here, because even without it, the series was already becoming a parody of itself. Normally, I dock these movies for the lack of continuity, but this one gains points for disregarding the wretched "A New Beginning". This is the most fun you'll have watching Friday the 13th.

And now we come to my favorite film in the series just for the pure entertainment of it: Friday the 13th Part 6 - Jason Lives. This is the sequel that should have happened instead of the one that came before it really. Instead of sticking to the previous Friday formula, director Tom McLoughlin decided to completely rework the formula and not just make it satisfying to the fans of the franchise, but also entertaining and even humorous for newcomers. It puts a cap on the quality of the series while at the same time honoring horror films of the past with visual and story references abound, including the electrifying rebirth of Jason ALA Frankenstein. This was also the film wherein Jason first became the superhuman zombie that he is best known for. There is nothing human left about him and he can take the same amount of punishment that he dishes out. The film is also a step in quality in a lot of different categories. The performances are fantastic, the script is dynamite and the film is endlessly well-shot & edited. Henry Manfredini even comes up with a new type of Friday score that reflects the changes that have come with the new formula. Of all the sequels, I can watch this one over and over again because of how entertaining it is. It's too bad the series couldn't keep up this kind of quality for the rest of the sequels that would follow, try as they might. Part 2 may be the most well-made entry but Part 6 is certainly the most enjoyable.

I dont remember if this is one of the ones that has a "local crazy" in it, but those are just the greatest. I know atleast 3 have the crazy old rapist who sneaks into the camp and watches them have sex, just as Jason does, and then he hears twigs snap and we see him turn around horrified with a butter knife in his eye. But its cool cause youre thinking, "thanks alot Jason. there were two psychopathic toothless sex-offenders loose in the town and you had to kill the one with a nice personality."