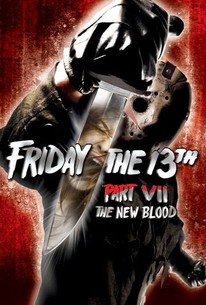 Critics Consensus: As lumbering and bereft of conscious thought as its unstoppable star, Friday the 13th Part VII - The New Blood finds the franchise in desperate need of the title ingredient.

Critic Consensus: As lumbering and bereft of conscious thought as its unstoppable star, Friday the 13th Part VII - The New Blood finds the franchise in desperate need of the title ingredient.

Directed by makeup effects artist John Carl Buechler, the seventh in the long-running, grisly horror series was far from the last, although the climactic fate of its antagonist would seem to suggest a final send-off. Lar Park Lincoln stars as Tina Shepard, a teenager with uncontrolled telekinetic powers. As a girl vacationing at Camp Crystal Lake, Tina killed her abusive father with the use of her mental abilities. Years later, seeking intensive counseling from manipulative, greedy psychologist Dr. Crews (Terry Kiser), Tina agrees to participate in a radical therapy that takes her back to Camp Crystal Lake. Unfortunately, Tina's psychic skills rouse the slumbering Jason Voorhees (Kane Hodder) from his watery grave and, in typically bloody fashion, the vengeful spook begins dispatching the randy teenagers partying in a house nearby. As Tina attempts to stop Jason's slaughter with the use of her powers, the mass-murdering ghoul encounters his toughest opponent yet. Friday the 13th, Part VII: The New Blood was often referred to by series fans as "Jason vs. Carrie," an apropos reference to Tina's strong similarity to the main character in the horror classic Carrie (1976). ~ Karl Williams, Rovi

Craig Thomas
as Ben
View All

Rank Every Friday the 13th Movie

The filmmakers have mastered the blood but not the tedium of all of the predictable killings. Nor have they eliminated the '"hate-women" subtext to the entire series of films.

The anxieties suffered by Tina throughout the film are well thought-out by the franchise's typically one-dimensional standards.

Carrie vs Jason should be a slam dunk, but there are simply too many unmemorable characters pulling focus here. The production is marred by MPA cuts and studio interference that virtually guaranteed that the film never stood a chance.

While it's let down by a truly atrocious final two minutes, the climactic battle between Tina and Jason is worth the price of admission alone.

Aside from its overt feminism, The New Blood is also a valuable exploration of childhood trauma and abuse, and how these events will shape us for the rest of our lives, usually for worse.

Friday the 13th: Part VII - The New Blood ultimately stands as one of the more overtly pointless entries within this franchise.

The further look at how the series just became goofier and goofier and hinted at Jason's inevitable foray in to space.

Enough goodies to keep the true Voorhees fans feeling finally satisfied after seeing what they'd been waiting on for almost twenty-years.

You cannot really take the results seriously, but they are fun, offering both...something never really shown in a

Despite an interesting premise involving a telekinetic woman, everything here seems to be on automatic pilot, with this being just another lazy, brainless and colossally awful sequel that has nothing of the cleverness and wit found in the series' previous installment.

It was very interesting to see someone with telekinesis fighting against Jason, you felt for a while at least that this was someone who might really stop him. The ending seemed incredibly final as well. But as we all know, like Michael Myers, Jason Voorhees does not die. I like the comparison of the girl to Carrie on here, it was a lot like that. And if you're a fan of these movies, you should check this one out. It's not great, but it's entertaining for horror fans.

Jason VS. Carrie - that would make a good alternate title for this entry. This time around in Friday the 13th Part 7: The New Blood, Jason has to contend not only with his usual victims, but a young woman with psychokinetic powers. Originally this film was written to be the long-awaited Jason VS. Freddy film, but when New Line Cinema and Paramount couldn't reach an agreement about the character rights, it was re-written to accomodate the VS storyline with a different character. Noted to death by the MPAA, Part 7 is really sparse as far as blood and gore go (probably the least amount of the entire series). The heroine of the film is also, character-wise, unwatchable. She is a constant cry baby throughout the entire film because her father was killed when she was very young. Most of the time she just comes off as annoying, and the story suffers for it. As for the other aspects of the film, they're all pretty much mediocre. Nothing new and nothing spectacular, especially as heavily-edited as the film is (which really destroyed its chances anyway). It has some fun moments, but overall, it's nowhere near as impressive as the previous entry. Fans tend to rally around the film because it marked the first appearance of Kane Hodder as Jason. Although he does give Jason a lot more strength and menace than any of the other actors who played him before, the overall quality of the film itself leaves much to be desired. It's definitely not a highlight of the series for me, and it's also the beginning of what I consider to be eventual downfall of the quality of the series.

oh ok. yea this might have a local crazy in it, but i think hes a just an old guy working the graveyard who probably saw the Grateful Dead back when they were called the Warlocks, and he discovers Jason's empty grave, and then BAM!, grave aint empty no more. then the opening credits roll and shit gets a whole lot worse.