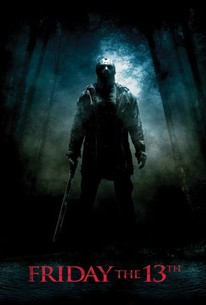 Critics Consensus: Though technically well-constructed, Friday the 13th is a series rehash that features little to distinguish it from its predecessors.

Critics Consensus: Though technically well-constructed, Friday the 13th is a series rehash that features little to distinguish it from its predecessors.

Critic Consensus: Though technically well-constructed, Friday the 13th is a series rehash that features little to distinguish it from its predecessors.

In this re-imagining of the classic horror film, Clay searches for his missing sister in the eerie woods of legendary Crystal Lake, where he stumbles on the creaky remains of rotting old cabins behind moss-covered trees. And, that's not the only thing lying in wait under the brush. Against the advice of police and cautions from the locals, Clay pursues what few leads he has, with the help of a young woman he meets among a group of college kids up for an all-thrills weekend. But, they are about to find much more than they bargained for. Little do they know, they've entered the domain of one of the most terrifying specters in American film history-the infamous killer who haunts Crystal Lake, armed with a razor-sharp machete--Jason Voorhees.

News & Interviews for Friday the 13th

View All Friday the 13th News

Critic Reviews for Friday the 13th

If you're a die hard Jason fan like myself, check out the movie with popcorn and a group of friends. If not, sit this one out.

Unfortunately, no matter how clever-clever the all-new screenplay might (occasionally) be at acknowledging the faults of the original, this does not make them magically go away.

One thing this latest rehash - No 11, by my count - does achieve, is make the original look like a frickin' masterpiece.

Unlucky for almost everyone. It's a sad day when a Friday the 13th remake is shown up by a My Bloody Valentine remake - couldn't they at least have sprung for 3-D?

This "reimagining", by the director Marcus Nispel, of the 1980 slasher movie is one hell of a bore.

Somewhere inside Jason Voorhees' latest escapade is a hilarious comedy yearning to break free from the stifling clutches of its over-serious guardians.

Friday the 13th is a mediocre film.

For a remake, it's not that bad. At least it throws some turns on the formula and manages to be original at some point. [Full review in Spanish].

Marcus Nispel's Friday the 13th retains at least some of the spirit that made the original such a classic.

Unfortunately, this Michael Bay produced version suffers from horror cliché-itis of the '00s.

I'd say they did a solid enough job of resurrecting a simple scary tale for a new generation.

Audience Reviews for Friday the 13th

Obviously, one goes into this movie expecting a lot of gruesome deaths, huge breasts and a lot to laugh about, just like when watching any other chapter of this trashy, brainless series. But this remake is never scary, tense or anything besides a predictable imbecility.

It's easy to understand why someone would want to remake classic horror films, especially the slasher variety. From a studio standpoint, it's a financial goldmine. All you need is a director, a low budget, and the star power of Jason Voorhees or Freddy Krueger, release it at the right time of year, and wait for the revenue to roll in. Artistically, although most of the movies can be defended if a nostalgic connection exists, the truth is, a lot of them haven't aged all that well. Many of them weren't that good to begin with. Once you divorce yourself from the aforementioned nostalgia, this accurately summarizes the entire Friday the 13th franchise. I was lucky enough to discover Friday the 13th as a youngster. So, there are times when I can go back and relive the ridiculous chapters from the 80's. This can be a real chore though. I still enjoy the premise and the Jason Voorhees character, so I more than welcomed an attempt to rejuvenate the franchise. The maker's of the film didn't stray very far from the original formula. What unfolds is what you'd expect. Teenagers show up at Camp Crystal Lake to party, they encounter Jason, and they pay dearly for doing so. What you get is not a reimagining, but a contemporary version of fossilized pictures, that have lost the majority of their relevance. What transpires actually borrows some coherent events from the first 4 chapters of the original series. So, it isn't just a remake of the original Friday the 13th. Which is a positive, because I have no desire to witness Pamela Voorhees in the slasher role. Let's be honest, one of the only reasons to watch, is to see Jason in action. Speaking of Jason, one of the reboot's undisputed successes is their portrayal of this iconic character. What's presented here, is the quintessential version of Jason. This rendition is a fast,menacing giant with noticeable cunning and a pronounced mean streak. The writers wisely chose to avoid much backstory, which eliminated the undesirable effect of having the character come off as sympathetic. One of the better scenes in the film focuses on Jason sharpening a machete. During the task, Jason flashes back to his mother's decapitation. The thoughts launch the character into a violent tantrum. Witnessing the fit of rage, is not only unprecedented, but made Jason actually seem demented, as opposed to a nondescript zombie. It was a nice touch. As expected, the film has its fair share of problems, but these are evident in all of the movies. First of all, it's very easy to feel apathetic toward the characters. To me, the film would be more exciting if I was actually invested in somebody's survival. As opposed to hoping that the characters are exterminated as soon as possible. It also wouldn't hurt to scale back the ridiculous antics of the teenagers. The "good times" are normally awkward celebrations that only serve to lighten the tension necessary to actually make the movie scary. It is easy to dwell on the film's faults, and it should at least be considered a missed opportunity. If you hated these movies before, or you were hoping for a radical new direction, you'll want to run like hell from this too. On the other hand, if your expectations are to witness a good Friday the 13th movie, you shouldn't consider 2009's rendition that disappointing. These days, I'm probably more willing to sit down to this version than any of its predecessors.

Michael Bay's Platinum Dunes takes another household name in the horror genre and desecrates it with a useless, unscary, boring, overproduced, and incompetently written joke of a movie. This is the kind of film that really gives horror a bad rep, providing further proof that the only worthwhile horror movies are the ones made independent of the studio system.

The remake of Friday the 13th is your typical remake. With nothing new to offer the genre, the film is predictable and poorly acted. I really don't know why they remake classic horror films. This film fails to really deliver an interesting twist on the lore of Friday the 13th and bring some refreshing ideas to the series. If you're looking for a great remake with this one, you won't find it here. The cast are horrible, and you really don't care when they finally get killed off. I really hated the film, and diehard Friday fans will most likely be disappointed with this reimagining of the classic film. I definitely was. This film is just uninspired and proves once again that you can't remake the classics. Friday the 13th is a legendary Slasher, and it spawned many imitators. With this remake, the filmmakers wanted to update elements for today's audiences, but it never is interesting. The body count in the film is too low; the film is boring and takes a while before it takes off. Marcus Nispel who previously helmed the Texas Chainsaw Massacre remake directs and crafts a film that is not worth seeing. Stick with the original movies; you'll be glad you did. This one ends up falling flat and it just ends up not giving fans what they want. With too much many elements missing from the formula, Friday the 13th 2009 is a bad Slasher that tries way too hard at making something watchable, and in turn loses touch of key elements to make this film work. Friday the 13th is like every other recent horror remake, boring, and unimpressive trash.