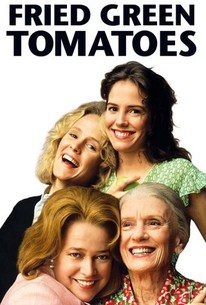 Critics Consensus: Fried Green Tomatoes' tearjerking drama is undeniably manipulative, but in the hands of a skilled cast that includes Jessica Tandy and Kathy Bates, it's also powerfully effective.

Critics Consensus: Fried Green Tomatoes' tearjerking drama is undeniably manipulative, but in the hands of a skilled cast that includes Jessica Tandy and Kathy Bates, it's also powerfully effective.

Critic Consensus: Fried Green Tomatoes' tearjerking drama is undeniably manipulative, but in the hands of a skilled cast that includes Jessica Tandy and Kathy Bates, it's also powerfully effective.

A woman learns the value of friendship as she hears the story of two women and how their friendship shaped their lives in this warm comedy-drama. Evelyn Couch (Kathy Bates) is an emotionally repressed housewife with a habit of drowning her sorrows in candy bars. Her husband Ed (Gailard Sartain) barely acknowledges her existence, and while he visits his aunt at a nursing home every week, Evelyn is not permitted to come into the room because the old women doesn't like her. One week, while waiting out Ed's visit, Evelyn meets Ninny Threadgoode (Jessica Tandy), a frail but feisty old woman who lives at the same nursing home and loves to tell stories. Over the span of several weeks, she spins a whopper about one of her relatives, Idgie (Mary Stuart Masterson). Back in the 1920s, Idgie was a sweet but fiercely independent woman with her own way of doing things who ran the town diner in Whistle Stop, Alabama. Idgie was very close to her brother Buddy (Chris O'Donnell), and when he died, she wouldn't talk to anyone except Buddy's girl, Ruth Jamison (Mary-Louise Parker). Idgie gave Ruth a job at the cafe after she left her abusive husband, Frank Bennett (Nick Searcy). Between her habit of standing up for herself, standing up to Frank, and serving food to Black people out the back of the diner, Idgie raised the ire of the less tolerant citizens of Whistle Stop, and when Frank mysteriously disappeared, many locals suspected that Idgie, Ruth, and their friends may have been responsible. Evelyn finds herself looking forward to her weekly visits with Ninny, and is inspired by her story to take a new pride in herself and assert her independence from Ed. Fried Green Tomatoes was based on the novel Fried Green Tomatoes at the Whistle Stop Cafe by actress-turned-author Fannie Flagg, who makes a cameo appearance as the leader of a self-help group. ~ Mark Deming, Rovi

Tres Holton
as Boy at Supermarket

Tom Even
as Judge

When a group of actors this gifted and lively tries so good-naturedly to deliver such an obvious message, the audience is left in the position of trying to stop a tidal wave. You may hate yourself for responding, but you're smothered before you know it.

It's a nice, pleasant celebration of friendship, but without much meat to chew on.

Directed and co-written by first-timer Jon Avnet, the episodic production manages to capture the fried-tomato flavor of the deep South without becoming too pushy or patronizing about it.

Fried Green Tomatoes is a case of a film acted with such skill and conviction that glaring problems of narrative, pace and structure seem like minor slips.

The movie never quite shakes its stiff, studied feel, just as the town of Whistle Stop never stops seeming the quaint creation of an art director.

For all of its false touches, its confusions, its incohesiveness and perplexing shifts of tone, there's something wonderfully sweet and zesty about Fried Green Tomatoes.

It doesn't quite have the courage to face its own implications and so leaves the story that follows in a kind of blur apt to offend no one but equally incapable of moving anyone.

Fried Green Tomatoes is gosh-darned lovable, even if it does get downright sugary at times.

Essentially a story about friendship between two pairs of women, then and now, it could be classified as an intelligent woman's picture, but this truly uplifting and gratifying movie can and should be enjoyed by all.

Fried Green Tomatoes is an engaging if sentimental tale, charmingly handled by producer-turned-director Jon Avnet and flawlessly acted by its four female stars.

Excellent movie about friendship and love. Kathy Bates' character befriends an old woman who tells stories of her past.

A bittersweet story about how the Whistle Stop Cafe brought together Idgie Threadgoode, Ruth Jamison & many others & a story to be told by Ninny Threadgoode to a southern woman, Evelyn Couch.

Another tale of the Southern woman, so spicy and headstrong that she ends up in multiple adventures including murder, love affairs, and the ultimate threat of betrayal between best friends. Friendship, the cornerstone to this feel good film, is the building block that parallels relationships of the past with the present state of wild eyed homemaker Kathy Bates, whose performance is both realistic, heart warming, and darn impressive. Accolades are worth throwing around for this love fest.