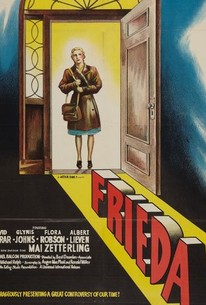 The problem of "enemy" war brides was eloquently addressed in the British drama Frieda. In her English-language film debut, Mai Zetterling plays the title character, the German wife of RAF officer Robert (David Farrar). Though an avowed anti-Nazi, Frieda faces acrimony and prejudice when introduced to Robert's friends and family. The problem is exacerbated by the arrival of her brother Ricky (Albert Levien), ostensibly a conscript in the Polish army but actually an unregenerate disciple of Hitler. A satisfactory ending is reached only when everyone-Ricky included-learns to stop hating and to bury the past. Based on a play by Ronald Miller, Frieda was released in the US by Universal, shorn of but one minute of its original running time.

Basil Dearden's plain, modulated direction, which leaves a doubt even in the happy ending... is exactly right for such a story.

This is a realistic, tense and well-acted film. Its approach is intelligent and straightforward and the direction is sensitive.

There are no featured reviews for Fqieda at this time.