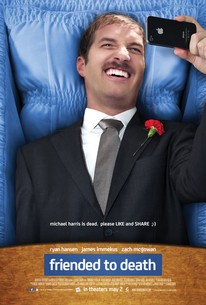 FRIENDED TO DEATH charts the extremes to which a desperate Facebook junkie will go in order to figure out who his true friends are. Laced with satire, this tongue-in-cheek bro-mantic comedy tells the story of obnoxious Los Angeles parking enforcement officer Michael Harris (Hansen). After being fired from his dream job and ditched by his best friend (McGowan), Michael begins to question whether anyone would care if he died. So with the help of his pushover ex-coworker Emile (Immekus), Michael does what any social media-obsessed loner would do: He fakes his death online to see who will show up at his funeral. In just hours, Michael's fake death post attracts a promising 22 'Likes.' Giddy and eager to milk the prank, Michael convinces Emile to help him stage a faux memorial service. But as plans start taking shape, Michael's reality gradually implodes, forcing him to reconsider what it means to be a "friend" in today's hyper-connected world of social media. (c) GreenStep

Amina Warsuma
as Widow
View All

News & Interviews for Friended To Death

View All Friended To Death News

Critic Reviews for Friended To Death

Movies have struggled to make social media cinematic, but judging from "Friended to Death," the revolution can wait.

The story's message may not be the most original one in the world - put down your device and make eye contact - but it's fun to watch it unfold in a world that, while far from realistic, feels real enough.

"Friended to Death" makes a labored point - that the Internet endangers actual intimacy - through a series of poorly conceived, rarely funny gags.

You can sense the director, Sarah Smick, gearing up to make a point. It proves rather obvious: Real connections are meaningful and too much Facebook is bad.

...a sly, yet extremely energetic wink at the dark side of our increasingly intrusive social media state of dependency...

Most of the film plays as a broad comedy, but its bromance is deeply felt, and the final scenes are sneakily poignant.

Had it been posted to YouTube rather than released in theatres, Friended to Death would have deservedly earned a surplus of "I dislike this" votes.

It won't kill you to click on a thumbs-up.

[Friended to Death] sputters along on fumes of cleverness, leaving Hansen's daffy, full-throttle commitment to his self-deluded protagonist as the movie's single positive asset.

Audience Reviews for Friended To Death

There are no featured audience reviews yet. Click the link below to see what others say about Friended To Death!