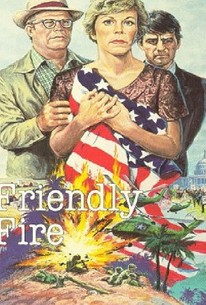 In this Emmy-winning TV movie, Peg and Gene Mullen's son is killed in Vietnam. Dissatisfied with the "official" version of their son's death, Peg and Gene conduct a soul-wrenching investigation of their own. Eventually the truth comes out: their son was accidentally killed by "friendly fire."

There are no critic reviews yet for Friendly Fire. Keep checking Rotten Tomatoes for updates!

There are no featured reviews for Friendly Fire at this time.