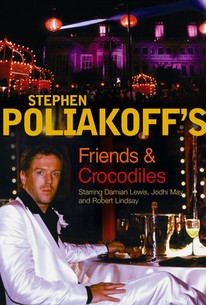 British helmer Stephen Poliakoff, the man responsible for 2003's acclaimed The Lost Prince (about a young British monarch whom the regents locked away to hide his epileptic fits), returns with the feature Friends and Crocodiles, starring Damian Lewis (An Unfinished Life), Jodhi May (The House of Mirth), and Robert Lindsay (Bert Rigby, You're a Fool). The film opens in the early '80s, with Lewis as Paul Reynolds, a slightly indulgent succès d'estime in the business world who presides over a mansion full of hyper-eccentric artistes. Reynolds hires a secretary, Lizzie (May), to manage his affairs and keep his houseguests in reasonable order. The drama then traces the emotional landscape of Paul and Lizzie's employer/employee relationship (their ups and downs) over the following two decades, which myopically reflect the changes in the larger British corporate landscape. ~ Nathan Southern, Rovi

Jodhi May
as Lizzie

Critic Reviews for Friends and Crocodiles

There are no critic reviews yet for Friends and Crocodiles. Keep checking Rotten Tomatoes for updates!

Audience Reviews for Friends and Crocodiles

Thank God for the BBC! Who else would take on intellectual literature devoid of car chases, large explosions and CGI? Poliakoff's template allows incredible talents like Damian Lewis and Jodhi May to really flex their acting chops. An unconventional take on boardroom etiquette and corporate rebellion.