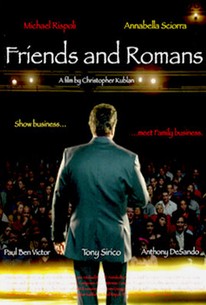 Nick DeMaio is an aspiring actor who is perpetually typecast as "Gangster Number 3" in films about the Mob. In an attempt to be taken seriously, Nick and his buddies decide to stage a play, and not just any play, but Shakespeare's "Julius Caesar," (which, after all, is just another tale about a "Don" and his "capos," except in iambic pentameter). Coming and going at odd hours for rehearsals, this motley crew attracts the attention of the Feds, who mistakenly assume these good guys are "goodfellas," and their play is a front for criminal activity. Typecast once again as a gangster--this time in real life--Nick has to prove his mettle, both onstage and off.

Erik LaRay Harvey
as Qarl with a 'Q'

Olivia Mallano
as Shut Up Girl

Frank Seger
as My Boy! Auditioner

Stacey Zervas
as Gloria The Gangster Moll
View All

Critic Reviews for Friends and Romans

Friends and Romans isn't the most sophisticated comedy, but it should inspire a few giggles.

Audience Reviews for Friends and Romans

There are no featured audience reviews yet. Click the link below to see what others say about Friends and Romans!