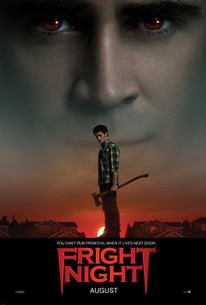 Critics Consensus: It may not have been necessary to remake the 1985 cult classic, but the new Fright Night benefits from terrific performances by Colin Farrell and David Tennant -- and it's smart, funny, and stylishly gory to boot.

Critics Consensus: It may not have been necessary to remake the 1985 cult classic, but the new Fright Night benefits from terrific performances by Colin Farrell and David Tennant -- and it's smart, funny, and stylishly gory to boot.

Critic Consensus: It may not have been necessary to remake the 1985 cult classic, but the new Fright Night benefits from terrific performances by Colin Farrell and David Tennant -- and it's smart, funny, and stylishly gory to boot.

Senior Charlie Brewster (Anton Yelchin) finally has it all-he's running with the popular crowd and dating the hottest girl in high school. In fact, he's so cool he's even dissing his best friend Ed (Christopher Mintz-Plasse). But trouble arrives when an intriguing stranger Jerry (Colin Farrell) moves in next door. He seems like a great guy at first, but there's something not quite right-and everyone, including Charlie's mom (Toni Collette), doesn't notice. After witnessing some very unusual activity, Charlie comes to an unmistakable conclusion: Jerry is a vampire preying on his neighborhood. Unable to convince anyone that he's telling the truth, Charlie has to find a way to get rid of the monster himself in this revamp of the comedy-horror classic. -- (C) DreamWorks

Will Denton
as Adam

Dave Courvoisier
as Newscaster #2
View All

If Fright Night is meant to be a send-up of the genre it takes itself too seriously - I can't remember a single decent joke, now I think about it - and if it isn't a send-up then it doesn't take itself seriously enough.

The fun of this new Fright Night is in the nuances, the quirky character bits and the sly bits of intelligence that sparkle along the way.

Fright Night 3D qualifies as a successful entry in a tricky genre - blending flip humour and emotional intensity in a way that feels true after its fashion to the facts of teenage life.

This is a pretty droll and well-made entertainment.

Why is the whole thing so watchable? Farrell is extremely good value. So is Toni Collette as the sex-starved but sensible single mom of high-school hero Charlie.

Anton Yelchin manages to hold his own against the devilishly delightful Farrell.

Too schizophrenic to succeed, as a remake or a stand-alone film.

Shot and presented in 3D, this is one film where 3d is not only appropriate, but works brilliantly.

This Fright Night manages to stay true to the original's tone, while enhancing the material, resulting in a fun little horror flick with a nice, creepy vibe.

While not quite as cheese-filled as its predecessor, the remake maintains the tongue-in-cheek kitsch that made the original work so well.

All in all it's a wild ride, and while the risks are few, the rewards are plenty. If you're looking for a fun time at the movies, don't wait.

Less of a B-movie creature feature than the original was and more straight up vampire film, but nonetheless an entertaining and quite funny remake that benefits from a more fleshed out plot. I found Anton Yelchin much more likable than William Ragsdale as Charlie and David Tennant to be absolutely hysterical as Peter Vincent compared to the straight laced version of the character in the original film. Colin Farrell plays Jerry much more reserved than Chris Sarandon did, but it was actually a little more serious of a role this time around so it worked. I do think both versions of the character work in their respective movies. The special effects are still not quite up to standards of modern films, but it almost felt deliberate by the filmmakers to give it a little B-movie charm. Overall, I actually liked this version better than the original, but both have their pros and cons.

[img]http://images.rottentomatoes.com/images/user/icons/icon14.gif[/img] While at first glance I dreaded a remake of the 1980's cult classic "Fright Night" to the belief that it would turn out to be as dull and dissapointing as the rest of the new wave of pointless rehashes. That it would fail in all departments in living up to the original it possibly could. Due entirely to a lack of justification for it's very existence. It sort of does but sort of doesn't. But the fact of the matter is that the new Fright Night is surprisingly a very smart, very funny, very gory, fantastically entertaining horror comedy that gives you exactly what it is that you pay to see. Craig Gillespie was right to choose Colin Farrell as the menacing and silently blood thirsty bad guy. There's no exception in that all the performances are great and are arguably the most entertaining aspects of the film. Christopher Mintz-Plasse has fun with his usual shtick although lowers it down slightly in tone, as he recieves a role in which he can lash out angrily despite not reaching the comedic and scary heights of his brilliant role in Kick-Ass. David Tennant however, is the ultimate harbinger of tear dripping, laugh out loud hilarity. If it was up to me I would be casting him in every single upcoming horror comedy simply because he is an energetic master of comedy. He get's a very raunchy and sweary role in this and i'm glad that it happened. The gore, the main attraction besides the actors, is also very good. Overall, the film is not as blood soaked as I wanted it to be but it managed to make up for it with some impressive moments of genuine suspense and panic. It's also very stylistically filmed featuring some dark and murky yet beautiful cinematography. I'd say it's definitely directed with enough style to classify it as a cut above the usual horror flick production stable. However even as it manages to tick all the boxes for light hearted, single viewing entertainment it is still incredibly unremarkable. But that's not a bad thing at all, it could have been a lot worse. Again it's in one ear and out the other. But while it lasts, it's absolutely terrific fun.

A solid remake. I would imagine someone other than Yelchin could have made a more appealing star, but he was adequate for the role. Farrell as the vampire nextdoor, "Jerry", was an interesting but enjoyable choice.

Featuring top-of-the-line frights, suspense, and even bursts of comedic wit; Fright Night is a sensational scare fest and a welcome change from what's passing for Vampire-themed entertainment these days. Colin Farrell displays an impressive swagger, but its never too much. He's a superior vampire to the lovesick wimps in Twilight or The Vampire Diaries. Farrell plays a charming, cunning killer - closer to Lugosi, Frank Langella, or George Hamilton. I also liked the Charley character (Anton Yelchin); he's got enough backbone to carry himself through his vampire-killing quest .Charley's supposed friend Evil Ed (McLovin) is too hilarious to describe. Girlfriend Imogen Poots is believable and hot, and horror entertainer Peter Vincent, played by David Tennant, is fantastic. Fright Night certainly beats the pack of teen horrors movies lately. Infinitely better than the Twilight saga, it even manages a clever put-down of that teen angst fest. Well-shot and directed (Las Vegas locale an inspired touch), if you'll forgive my cliché, this movie is wickedly funny