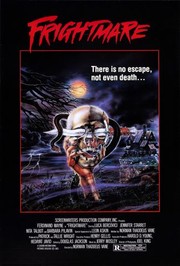 Justin A
October 17, 2015
Another movie I feel I don't have much to say about. It's a strange plot. Drama students steal the corpse of a famous horror actor because... reasons? Haven't they seen Children Shouldn't Play With Dead Things? Of course, the actor comes back and starts murdering all of them one by one. Jeffrey Combs is in it (very young) and he gets the best death. It was very fitting too, considering his history as Herbert West. The ending cemetery chase during the day is fun. I really have no idea why, I just like chases that take place in cemeteries, especially sunny Californian cemeteries. The most memorable part of the movie is the horror actor who has risen from the grave (again because... reasons?). His acting is so cheesy, but it's mostly enjoyable. He even does a racist asian thing with his face. You know what I'm talking about, the thing little kids do when asked to make the face of a Chinese person where they pull back their eyelids. Yeah, I'm rambling now. Fun, but very forgettable movie.

Steve J
½ June 1, 2014
Wow, I wanted to like this but I must say it sucked, Ferdy Mayne notwithstanding. I was ready for it to be over about a half hour in. After that it's just marking time till the idiot teens get slaughtered. Boring. Watch the 1974 film of the same title by Peter Walker instead, for some REAL chills! As for this, even die-hard slasher fans could do better to find their fix. This is tame, lame, same.

Super Reviewer
Aj V
January 16, 2011
This slasher flick is so predictable and poorly made, it's just too boring to watch.

Miss.Gory R
May 14, 2008
LOVE this film! Right up there with 'ONE DARK NIGHT' we are treated to a beyond Death experience with a dead Horror Star, and 5 Horror Hounds who just cannot let him alone...Jeff Combs, then a nobody, was chosen for his role just because they needed a brunette male...Oh, How some make it...Highly recommended...
Gorewhore Out.

Matthew K
½ February 17, 2008
This movie was better when it was called "Children shouldn't play with Dead things"


A group of obnoxious film students (including Bercovici, Combs, and Starrett) steal the body of recently deceased horror movie star Conrad Radzoff (Mayne) and take it to the now-abandoned house that served as the set for many of his greatest films for a party. They live to regret their actions (but only momentarily for most of them) as Conrad's corpse reanimates and kills them, one by one.

"Frightmare" is an interesting blend of 1930s "dark old house" atmosphere and 1980s slasher-film sensibility. For the first half of the movie, it looks like the filmmakers will actually manage to pull it off, but then things start to deteriorate, as the film seems to loose track of time by flipping seemingly at random between day and night, and the story only moves forward because the already dimwitted characters lose all mental faculties and start doing all the idiotic things that characters in 1980s slasher movies do.

The first half of the movie is great fun, however, particuarly if you're a lover of old horror films. Mayne, who portrays a character who is secretly even more evil and spiritually corrupt than any monster he ever portrayed on screen, does a great job at presenting Conrad Radzoff as an amalgam of several classic horror actors--he's mostly doing a Christopher Lee impersonation, but there are some Vincent Price mannerisms and Bela Lugosi gestures thrown in. (In fact, Radzoff is more of a Christopher Lee charicature, despite the whole "buried in his Dracula costume" bit in the movie... if you read interviews with Lee from the 80s and early 90s, he comes across sounding just like the pompous ass that is Conrad Radzoff.) Things get a bit tedious as Undead Conrad murders the film students one by one, and the fact the film can't seem to keep track of itself is also annoying. (Plus, the cops in this film take first prize in the Never Should Have Been Allowed to Graduate the Police Academy category for sheer lack of investigative abilities.)

It's a shame this movie went off the rails... but I suppose that is just like many of the horror movies from the '30s and '40s that it was plainly inspired by and trying to be a homage to. Many of those films seem to start out strong and then sort of fall apart toward the end as well. There was a lot of potential in the idea here. A remake with a stronger script and perhaps Christopher Lee lampooning himself in the role of Conrad Radzoff would be a worthwhile venture.

Despite its obvious weaknesses, "Frightmare" would make for a good addition to a Halloween movie-party, particularly if one or more of the fright-films from the Golden Age of horror is also included in the mix.
Page 1 of 1