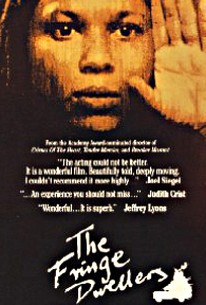 Bruce Beresford returned to the austerity of his first Australian films with The Fringe Dwellers. Kristina Nehm stars as an Aborigine woman named Trilby, who along with her tribespeople lives on the fringes of "accepted" Australian society. Trilby's mother (Justine Saunders) urges her family to remove themselves from squalor and move up to a fashionable all-white suburb. What with the snobbery of her new neighbors and an onslaught of visiting relatives, Trilby never has a moment of happiness. She seeks solace in the arms of her boyfriend (Ernie Dingo), but this only results in an unwanted pregnancy. Her "escape" to a better life is an indirect result of her newborn child's death. Bruce and Rhoisin Beresford adapted the script of The Fringe Dwellers from the novel by Nene Gare.

Annie Saward
as May

Critic Reviews for The Fringe Dwellers

A gentle and powerful new movie by Bruce Beresford.

One of the few Australian films selected for Competition at Cannes (1986), Bruce Beresford's adaptation of the novel is a milestone for Australian cinema.

A sensitive cross-cultural study about an aboriginal family in Australia.

Audience Reviews for The Fringe Dwellers

There are no featured audience reviews yet. Click the link below to see what others say about The Fringe Dwellers!