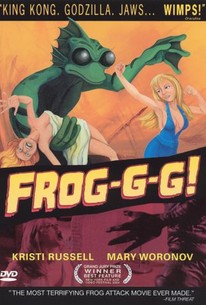 Cody Jarrett's grade-Z horror comedy film Frog-g-g! concerns a mutant frog that emerges from the water and wants to reproduce with the only species that matches it genetically: human women. Kristi Russell plays Dr. Barbara Michaels, an EPA agent who realizes what is happening before anyone else. Unfortunately, she has a difficult time convincing anyone of her theory until it is too late and the mutant begins attacking.

Jennifer Saxon
as Girl under bleachers

If Frog-g-g! is a satire, then where are the jokes? And no, incessantly ridiculous dialogue doesn't not count as a "joke."

There are no featured audience reviews yet. Click the link below to see what others say about Frog-g-g!!