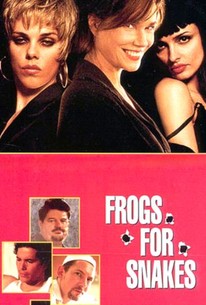 FROGS FOR SNAKES is a neo-noir comic thriller centering on the hopes and ambitions of a motley ensemble of New York theater actors, who moonlight as illegal money collectors. Eva, the only group member with genuine acting ability and common sense, is fed up with the pretense of this twisted underworld and dreams of leaving town with her five-year-old son, Augie. She yearns to move to the suburbs and simply "be." Eva's soul mate in this strange, incestuous community is Quint, who owns the diner where she waitresses. In the meantime, Eva supports herself and her son by making collections for a loan shark, who just happens to be her ex-husband, Al Santana. Al, the gang's "boss", also fancies himself a theatrical impresario. He plans to stage a production of David Mamet's American Buffalo and has already cast two of the three male parts. Naturally, everyone wants a part, particularly the coveted role of Teach, in this classic production. Al is confronted by his driver/hitman/actor UB who is desperate for a role. He tells Al, "I f**king love American Buffalo. It's my favorite play. I'd kill to play Teach!" Al offers UB the part if he kills Eva's new boyfriend Zip. Ever the ambitious thespian, UB whacks Zip and sets the film on it's merry and murderous way - as all the characters get to perform their favorite monologues for anyone who will listen. Ultimately, Eva teams up with her friend, Myrna, for a double mission of score settling -- to find both their kidnapped children and Zip's killer.

Taylor Mead
as Doctor
View All

Critic Reviews for Frogs for Snakes

Not a film so much as a filmed idea. That could be interesting, but alas it is a very bad idea.

Poe pulls no punches in his merciless depiction of hams desperate to strut their stuff, even with fresh corpses in attendance.

Audience Reviews for Frogs for Snakes

There are no featured audience reviews yet. Click the link below to see what others say about Frogs for Snakes!