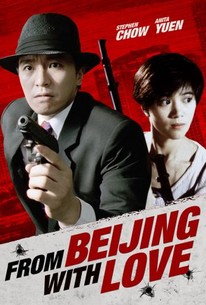 From Beijing with Love Photos

Hong Kong comedy icon Stephen Chiau stars in this wild and wooly parody of 007 spy thrillers. Ling Ling-chat (Chiau) leads a double life, living both as a modest street vendor in Beijing and a suave international spy. When a priceless dinosaur skull is swiped from China, a rogue criminal known only as "The Man With the Golden Gun" is the prime suspect. Ling is called away from dispensing pork products and sent to Hong Kong to investigate. There, a paid assassin named Siu-kam (Anita Yuen) has Ling in her sites. Yet Ling's utter stupidity and dumb luck makes him seeming invincible and she switches sides. When the duo return to China, Ling realizes that his real enemy is none other than his boss.

Critic Reviews for From Beijing with Love

Promising Hong Kong spoof, but it fizzles out halfway through. Some funny redundant gadgets, and John Woo spoofage, but never goes anywhere.

James Bond spoof that is much more bloody than amusing.

Audience Reviews for From Beijing with Love

Ah yes, the good ol Hong Kong "throw everyting into the mix" approach of filmaking that we don't see that often these days. One second there is a joke about spy gadgets, then there's a little kid seeing his dad dying infront of him. This is clearly a cultural shock for many in the west, for the HK aficionado this was the bread and butter back in those days. Now, "From Beijing" still shows a Stephen Chow polishing his craft, still trying to get the right flow, so this one is not as strong as his following work. Still fun to watch, even with all the verbal comedy lost in translation.

This is one of the funniest of Stephen Chow movies. Everytime I watch it, I would find something new to laugh about (5x already). But it can make you weep at some point, too.

Hillarious parody of the James Bond films. Actually I'll take this film and For Your Height Only over any Bond film anytime.

From Beijing with Love Quotes