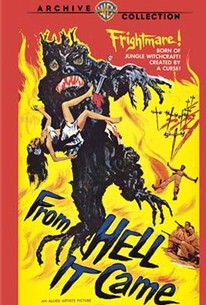 From Hell It Came Photos

This horror movie, set on an isolated island in the South Pacific centers around a hapless native prince who receives a death sentence from the tribal witch doctor after he is caught associating with the American scientists who have come to check into the left-over radiation from an atomic bomb explosion. As the witch doctor stabs the prince in the chest, the young man swears that he will have his revenge. The shaman then buries the royal corpse upright in his coffin. Time passes and a terrifying tree stump grows from the prince's grave. With a fierce expression etched into the trunk, it begins to walk the island and exact its horrific revenge on everyone involved in his murder. The tree stump disappears when it steps into some quicksand and slowly slips back into the earth from which it came.

Lenmana Guerin
as Dori
View All

Critic Reviews for From Hell It Came

The idea of a tribal folklore monster coming to life would not be a bad one, but that is about the only thing that is good about this often genuinely incompetent film.

Audience Reviews for From Hell It Came

From Hell It Came, as the title suggest, is a movie that literally came from hell. Never have I seen a more poorly made movie since the Gingerdead Man franchise which I truly hate. It's start with an accused South Seas prince being executed, and then returns as a radioactive walking tree stump. That's right, a radioactive tree that kills people. Thankfully for most of the movie the killer tree doesn't appear because when it does it's unspectacular and boring. The only thing more wooden than the tree itself is the acting. Most likely because everybody working on this has never seen another movie. Now what make this possibly the biggest waste of time is the the way the people kill the tree. They shoot a dagger that was already in his heart, which makes this one the most flawed movie ever made. I wouldn't recommend this, my suggestion is if you find a copy of this movie. Get a cross, a priest, and send this movie back to Hell where it came from.

From Hell It Came Quotes