From Noon Till Three1976 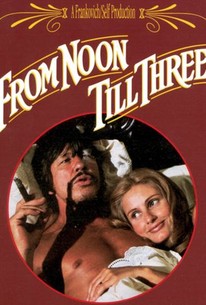 From Noon Till Three Photos

Written and directed by Frank D. Gilroy, this Western casts Charles Bronson as Graham Dorsey, a two-bit Western outlaw who has a three-hour affair with lonely Amanda Starbuck (Jill Ireland). When Dorsey is reported killed, Starbuck capitalizes on her liaison by building up the "legend" of the supposed deceased outlaw. Soon Dorsey has become an icon, glorified in song, fable, and dime novels. Imagine Starbuck's discomfort when he turns up very much alive, and extremely upset at being turned into Amanda's own private cottage industry. At the end, Dorsey isn't even left with his own identity. This picture is somewhat unconventional for a Western, downplaying violence in favor of characterization and dark humor.

Héctor Morales
as The Mexican

Alan Bergman
as Songwriter
View All

Critic Reviews for From Noon Till Three

The movie opens unsteadily and takes too long to close, but the things that happen between noon and three give us new ideas about Bronson's possibilities.

Charlie Bronson is in a tongue-in-cheek Western spoof comedy, and it is hilarious! Not only is the picture funny, Bronson is screams!

Based on a set of excellent characters, the comedy develops with ease and a good rhythm. It covers the old themes of the Western in an original style that eschews the clichés of the genre. [Full Review in Spanish]

A laughable piece of idiocy.

One of the most unappealing offbeat romantic/comedy Westerns ever.

Audience Reviews for From Noon Till Three

There are no featured audience reviews yet. Click the link below to see what others say about From Noon Till Three!

From Noon Till Three Quotes