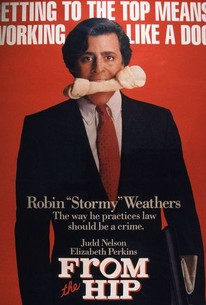 Critics Consensus: From the Hip finds Judd Nelson flexing previously unseen acting muscles, but this legal comedy is too grating to pass the bar.

Critics Consensus: From the Hip finds Judd Nelson flexing previously unseen acting muscles, but this legal comedy is too grating to pass the bar.

Critic Consensus: From the Hip finds Judd Nelson flexing previously unseen acting muscles, but this legal comedy is too grating to pass the bar.

From the Hip Photos

Director Bob Clark, whose previous cinematic endeavors ran the gamut from Porky's to A Christmas Story, called the shots on From the Hip. Fresh out of law school, Robin Weathers (Judd Nelson) is hired by a law firm not known for its ethics. Weathers' first client is a man who, up to trial time, was perfectly willing to cop a plea. Instead, the novice lawyer sharkishly secures a "not guilty" verdict--not to mention a public reputation as a live wire. His jealous older colleagues decide to get even with Weathers by assigning him a case that cannot possibly be won. Thus it is that Weathers is assigned to defend insufferable murder suspect Douglas Benoit (John Hurt), who refuses to cooperate with his attorney even though he's facing a death sentence.

Will Knickerbocker
as Security Guard

Critic Reviews for From the Hip

It's a fairly good film of fits and starts.

The courtroom shenanigans have absolutely no basis in reality, and while they're occasionally entertaining, they're mostly as overdone and tasteless as the action in Clark's other films.

It's such an embarrassingly lame comedy that you could easily imagine some mischievous attorney filing suit -- for defamation of the entire profession.

Stormy is the richest and most adult character Judd Nelson has played. And Nelson gives the welcome impression that he is growing up and coming to terms with things.

The story is interesting and the movie is well acted by Elizabeth Perkins, Darren McGavin, Nancy Marchand, Ray Walston, David Alan Grier, and others.

"From the Hip" has its heart in the wrong place. That it even has a heart is part of the problem. This picture needs to be considerably more ruthless than it is.

The flow of obnoxious silliness starts in the first 10 minutes. It's relentless, and you have wonder early why $10 million was spent in making the movie, and why the filmmakers invested two years of their lives on it.

A rather preposterous courtroom comedy graced with a touch of class by John Hurt's masterly performance as the accused murderer.

It is far too serious, too often, and Judd has to emote -- and you know what that means: the Nasal Method, nostrils a-flaring.

From the Hip is sort of like a bratpack version of And Justice for All, which is to say the film is narcissistic trash as opposed to just plain trash.

Yeah, the movie with Judd Nelson as the lawyer with a ***** in his briefcase.

Audience Reviews for From the Hip

Has a sharp shift in tone between the first half and the second plus Judd Nelson is not the most charismatic leading man but the story is decent and there are excellent performances by Nancy Marchand, Darren McGavin, Ray Walston, Alan Arkin and particularly John Hurt who steals every scene that he's in.

From the Hip Quotes