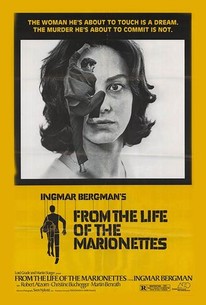 Produced and directed for German television, Ingmar Bergman's From the Life of the Marionettes starts out in color and switches almost immediately to black-and-white. This cinematic self-indulgence is ideally suited to the subject matter: the horrible consequences of a rapidly disintegrating marriage. The husband, Peter Egerman (Robert Atzorn) is unable to articulate his frustration through normal channels. Warped by his repression, Egerman ends up raping and murdering a prostitute. This outrage occurs at the very beginning of the film; the rest of the footage is devoted to a semi-documentary study of the failed marriage, the police investigation, and the husband's twisted psyche. Once again, Bergman's vision is superbly realized by the camerawork of Sven Nykvist.

It's in those fully imagined marital fights that the film sheds it straightjacket of alternating plot twists, and lets the richer, more mournful emotions creep in.

The subject of this Ingmar Bergman film is repression, but everything is dismayingly on the surface.

Bergman's not exactly successful examination of the events and warped psychology leading up to a bourgeois businessman's murder of a prostitute.

From the Life of the Marionettes is a splendid draft of the Swedish director's last work. [Full Review in Spanish]

The film is very restrained, rather cool, and with an unabashed fluency of direction which prevents it from becoming enmired in the stickier reaches of the Scandinavian soul.

Bergman's reality is tense and stark.

It explores Bergman's usual concerns over marriage, sex and despair, but is not up to the director's better works.

The title signifies that the husband is just another puppet in the scheme of things, unable to properly respond to sensual and emotional arousal that varies from the routine structure.

From the Life of the Marionettes zeroes in on one troubled marriage and the ambiguities of human sexuality.

In "From the Life of the Marionettes," a tender embrace between a half-naked prostitute(Rita Russek) and her customer, Peter Egermann(Robert Atzorn), soon turns ugly, as he suddenly attacks her before brutally strangling and sodomizing her. The first person on the scene is Peter's friend, Professor Mogens Jensen(Martin Benrath), a psychiatrist. Interviewed afterward, he wonders at what could have driven Peter to such a heinous act. Yeah about that. Turn the clock back a couple of weeks, and Peter is telling Mogens a fantasy he has about killing his wife Katarina(Christine Buchegger), a fashion designer, which he instantly dismisses as harmless. Once Mogens thinks Peter has left, he calls Katarina for a possible assignation but she has second thoughts, with, unbeknowst to them, Peter hidden in the room. "From the Life of the Marionettes" is a dark and disturbing movie about a murder that is much more concerned with the murderer than the victim. As the movie goes on, the possible motive becomes increasingly more complex to the point where Peter gets what he has been seeking all along. Some of that motivation might come from him feeling trapped, as he is pulled and pushed in all directions, hence the movie's title. As oft-putting as some of Ingmar Bergman's later films can be, it might surprise some that this one is a little more accessible, as the movie's circular structure draws the viewer in with a limited amount of exterior shots to heighten the claustrophobia. For the most part, Bergman is operating on all gears with his patented use of close-ups and the positioning of faces. For this film, Sven Nykvist shoots mostly in black and white, with occasional flashes of brightness to heighten the dreamlike imagery; the only color images coming at the beginning and the end, with the reds accenting the lurid atmosphere of the strip club.

Bergman was on top form writing this piece - there's lots to think about. What motivates a respectable man, whose mental state indicates only a small risk of self-harm, to undertake such a violent and frenzied crime? Do the ulterior motives and actions of those around him (wife, shrink, wife's business partner...)deliberately or unwittingly trigger the crime - or indeed are those sub-plots entirely incidental to the central event? These questions are not answered - they are raised and illuminated. This is not Bergman's greatest piece of cinema - the mixture of documentary, drama and flashback can be a little disorienting - but the argument of the film drives on relentlessly and it is compulsive watching. Well worth seeing.

A somewhat underrated Bergman film, made in Germany during his tax exile from Sweden. The film starts in colour, with a brutal murder by the main character. What follows next is a series of non chronological scenes before the crime and interrogations after the crime, all illustrating the main characters troubles and what drove him to the murder. Visually the film is beautiful thanks to Sven Nykvist, especially the black and white cineamatography (which 90% of the film is). Plus there are some brilliant surreal dream sequences.