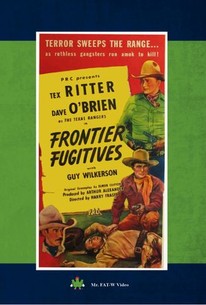 The penultimate entry in the Texas Rangers lineup, PRC's super-low-budget rival to Republic Pictures' Three Mesqueteers series, Frontier Fugitives once again stars Tex Ritter, Dave O'Brien, and Guy Wilkerson. This time, the trio are on to a gang that preys on both traders and Indians. Trailing the main suspect in the killing of Trader Williams (George Morrell), Tex is accused by a fake Indian agent (Jack Ingram) of murdering a brave. The latter, however, proves to be merely another member of the gang in disguise but before he can clear his good name, Tex has to get himself out of jail. When not battling crooked Indian agents and comic opera braves, Ritter performs Al Dexter's "Too Late to Worry, Too Blue to Cry" and "I'll Wait for You, Dear." The Western was filmed on location at Chatsworth, CA.

There are no critic reviews yet for Frontier Fugitives. Keep checking Rotten Tomatoes for updates!

There are no featured reviews for Frontier Fugitives at this time.