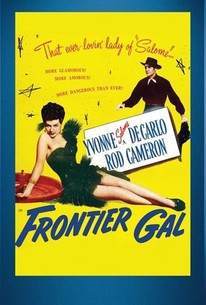 Johnny Hart (Rod Cameron) is on the run from the law after killing one of the men who shot his partner. He passes through a town and stops at a saloon owned by singer Lorena Dumont (Yvonne de Carlo). The two seem a good, albeit tempestuous match, although Johnny has no plans to marry -- Lorena has other ideas and a shotgun wedding ensues. Blackie (Sheldon Leonard), an outlaw who is jealous of the marriage, informs Lorena of Johnny's wanted status, and he ends up getting caught by the law after their wedding night. He serves six years and returns to find that he and Lorena don't get along any better than they did before, and that he's also the father of a five-year-old girl (Beverly Simmons). Also lurking about is Blackie, whom he recognizes as one of the men who killed his partner, and Blackie wants Johnny out of the way so he can marry Lorena. Johnny and Lorena fight over custody of their daughter and Blackie nearly gets them each killed at one point or another. He kidnaps their daughter before Johnny dispatches him. He finally realizes that the only way he can win Lorena is to meet her cup for cup and blow for blow, until she understands that he loves her. The film, a sort of Western +Taming of the Shrew, ends on a note of romance and reconciliation.

Eddie Borden
as Men at Table

A big, colorful parody of a horse opera with all the galloping excitement of the real thing.

There are no featured reviews for Frontier Gal at this time.