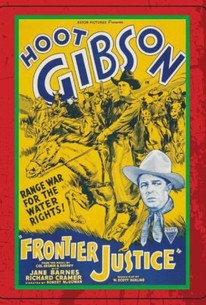 Unlike most low-budget B-Westerns, several of Hoot Gibson's vehicles from Diversion Pictures were based on a literary source, in this case a pulp fiction novel by Colonel George B. Rodney. Helmed by former Our Gang director Robert McGowan, Frontier Justice presented Gibson as Brent Halston, a carefree cowboy whose father (Joseph W. Girard), a cattle rancher, has been committed to an insane asylum by a certain Dr. Close (Lloyd Ingraham). But as Brent discovers, the good doctor is operating as an agent for unscrupulous sheep owner Gilbert Ware (Dick Cramer), a megalomaniac who wants to drive the cattle ranchers off their lands. When Brent tries to interfere, Ware's even more unscrupulous partner John Wilton (Roger Williams) has him framed in the killing of a sheep farmer (Silver Tip Baker). About to be lynched by the vengeful sheep owners, Brent makes his escape, taking Ware hostage. Naturally, everything is neatly settled in the end when Wilton is exposed as the real murderer. Photographed by the veteran Paul Ivano, who had functioned as cinematographer on such silents as The Four Men of the Apocalypse (1921) and the notorious but handsomely mounted Queen Kelly) (1929), Frontier Justice was certainly better-looking than most inexpensive genre films, a fact that boded well for the remainder of Gibson's six Westerns for Diversion Pictures.

There are no critic reviews yet for Frontier Justice. Keep checking Rotten Tomatoes for updates!

There are no featured reviews for Frontier Justice at this time.